If you’re a little baffled about what to look for while souvenir shopping in Cappadocia, then allow us to fill you in on everything Cappadocia is famous for.

Well, the first thing any local will tell you is that the area’s most famous products are its wine and its ceramics. But it’s a little known secret that Cappadocia is also a huge producer of truffles!

Between October and November, certain areas of Cappadocia are rife with truffles. However, as this most luxurious of natural fungus (that sells for around 3500 euro per kilo in Europe!) is underground and barely used in Turkish cooking, most of it is wolfed up by local wild boar. We found this out in 2004, from a Swiss couple who had moved to the area. The couple were so swamped in the product the offered some to us by the jar! The truffles are harvested in October and November before being dried out so they keep all year.

But the question remains as to where this delicacy is sold. Ask around. In 2013, the news broke that truffle was now being sought in the area, but the mystery persists. If you manage to spot any while shopping in Cappadocia, dear reader, please let us know!

Uçhisar is the most popular area of the Nevşehir region. This being the case, it has the most options for souvenir shopping in Cappadocia. There are dozens of stores here that specialize in items crafted from zultanite, a gem found in Muğla-Milas (and one of five precious stones that change color). Plus, there are also many items made from onyx, a gem from the Cappadocia region that reflects the light magnificently.

If you are in a rush, all your shopping in Cappadocia can all be done in one at the Özler Art Center. They sell everything from jewelry to tobacco, fairy chimney ornaments and more. Staff are well informed on gemstone items. Address: Tekelli Mahallesi, Bilal Eroğlu Cd. No:73, 50180 Göreme Website Tel: (0384) 219 20 26. Click for location.

Ceramics and Pottery at Avanos

Located in the ceramics quarter, the Pottery Workshop is also home to the famous Hair Museum. When you first enter, you are invited to observe ceramic-making up-close and given some information on the art before entering a display area where the finest works are put on show. The artists that have contributed to this display are deserving of the highest accolades. There are a vast number of pieces on show and the feeling one gets is that of having entered an expansive museum. But this workshop is, in fact, more of a ceramic boutique and offers items of various value. If you prefer to leave your shopping in Cappadocia, then simply enjoy the artwork! Address: Yeni Mahallesi, Yeni Mh. Hasan Kalesi Mevkii No: 3 Nevşehir, 50500 Avanos Tel: (0384) 511 45 77. Click here for the website. Click for location.

Chez Ali is another of Avanos’ famous ceramics masters. Chez Ali Pottery is full of completely hand-made items and visitors can enjoy watching – and you can even trying you hand at making pottery of your own. Address: 50500 Çavuşin Köyü/Avanos/Nevşehir. Tel: 0384 532 71 50. Click here for the website. Click for location.

Due to the igneous make-up of its rocky terrain, Cappadocia is the perfect environment for planting fruitful vineyards. Thanks to this, it has been a hub of wine production for centuries. The “Emir” type of grape is of particular value in the production of boutique wines and grow especially well in the Ürgüp area. Thanks to its special quality, wine is probably the second biggest contributor to the region’s economy after tourism. Cappadocia has two major producers: Kocabağ and Turasan.

Turasan Wines are the first company that come to mind when one thinks of Cappadocian produce. Their manufacturing plant, founded by Hasan Turasan in 1943, is still one of the largest of its kind in Turkey. You can visit the factory and indulge in a little wine-tasting yourself. Any wine produced using “Emir” grapes is particularly worth a try. Address: Yunak Mahallesi, Tevfik Fikret Cd. No:6, 50400 Ürgüp Tel: (0384) 341 49 61.  Click here for the website. Click for location.

If you would like to purchase wine and find out more about what goes behind its production, pay a visit to Memduh at Kocabağ Wine House. This is the oldest of its kind in the region, having produced since 1972 and having been awarded 6 gold and 17 silver medals in international wine competitions before being awarded the honor of Turkey’s best white wine producer in 2017. You can tour the factory and sample a number of wines completely free of charge before picking out your favorite here. Address: Aşağı Mahallesi, Adnan Menderes Cad. No:40, 50240 Uçhisar Belediyesi Tel: (0384) 219 29 79. Click here for the website. Click for location.

In truth, Cappadocia has never particularly specialized in weaving or carpet-making. There are various other towns and cities in Turkey, such as Isparta, who lay claim to that. However, with the increase of tourism, there has been growing demand for sales of oriental rugs. And so it goes that, generally speaking, while the men of the area have worked in pottery and ceramics, the women have gotten on with the task of weaving carpets. Much production has more recently moved to factories, but rugs from Avanos and Göreme have proven their worth with traditional methods. 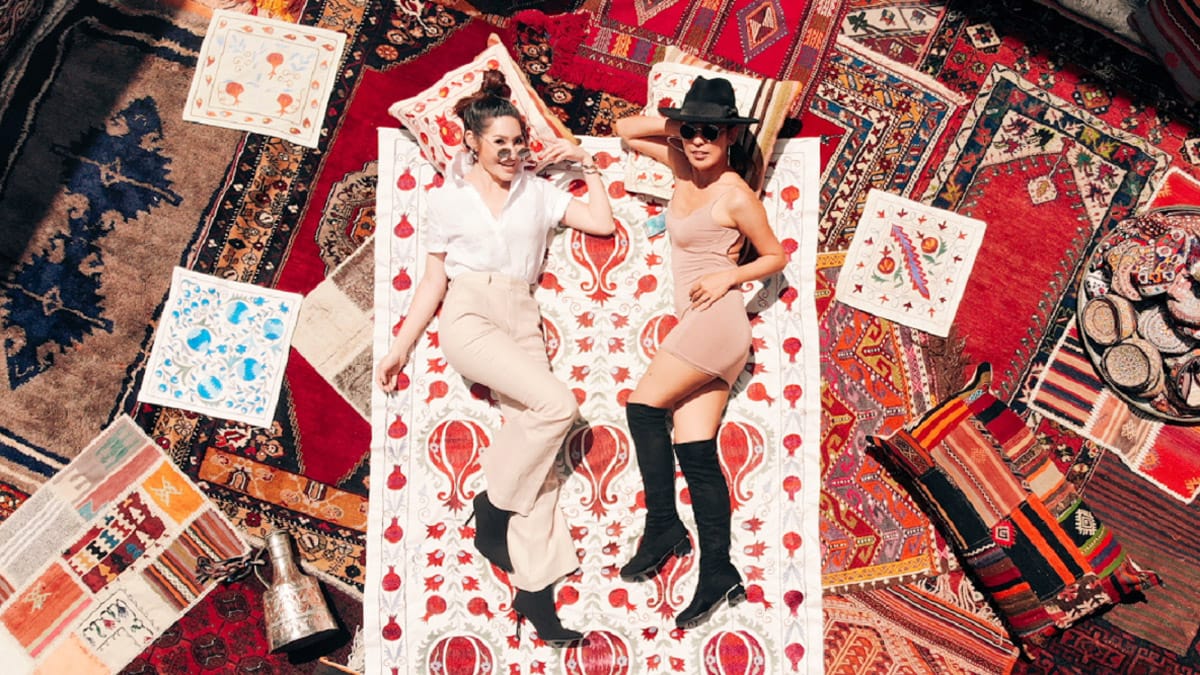 This is Göreme’s own museum of ethnic rugs and carpets. As taking photos of the splendid array of designs on offer here has become so popular, you now have to book ahead if you want to take a snap. Still, the place is highly enchanting, so it’s worth a tour even if photography is highly restricted unless you book in advance. Address: Hakkı Paşa Square, next to the Roman Castle. Click here for the website. Click for location.

This is a store in Avanos which only stocks hand-made, quality rugs – and is especially famed for its silk produce. Bazaar 54 also gives you a chance to watch how local carpet making women weave the area’s rugs by hand. Address: Cumhuriyet mah, Kapadokya Cd. No:77, 50500 Avanos. Website Tel:+90 384-5112454. Click for location.

The village of Soğanlı lies a little further out from Nevşehir towards Kayseri and is famed as the place where the decorative dolls in traditional dress sold all over Cappadocia are sold. The dolls are in such demand that entire families in this village get by solely on their production. They say that the original doll was handmade by a local woman for her child to play with. In our view, if you get one of these hand-made dolls while shopping in Cappadocia, it beats any mass-produced fairy-chimney ornament and also helps the local economy.

If you are set on getting local produce while shopping in Cappadocia, you can’t go wrong with raisins, fruit leather (“pestil”), and the pekmez that we obsessively load up on for breakfast. There’s also a number of sweet offerings, such as pestil and köftür to make the most of.

Cappadocia’s grapes are used for more than just grape molasses and wine. A sweet, sugar-free jelly of sorts, called köftür, is also produced here. Köftür occurs when grape juice, drained from the harvest, is boiled and flour added until it takes a certain texture. The result is left to rest for a day before being carved up and left in the sun piece-by-piece for 3-7 days. This is a special dessert of the region and just like raisins, can last throughout the year. Köftür can be found in markets all over Cappadocia.

Although the Eastern city of Malatya is Turkey’s unrivaled apricot king, it is what Nevşehir does with its own produce that makes it worthy of note. In Nevşehir, raisins are more than just something to snack on. Locals add raisins to meat, mix it with mince, and even stuff it in sarma with rice. You’ll be amazing by how well the mix of sweet-and-meat goes down in these dishes. Many products are available in markets and shops around the area.

Nevşehir is Turkey’s pumpkin seed capital. Here, the seeds are mixed with milk to acquire their flavor. A good quantity can be purchased relatively cheaply. Seeds are widely available across the area, so look out for them when food shopping in Cappadocia markets.

First off, this dried cream, or “kuru kaymak” in Turkish, is like nothing you’ve ever tasted. I’m not sure how to describe it. It’s sort of a wafer, sort of a cracker, and sort of the crême-de-la-crême (literally). Whatever it is, it’s delicious. One eats it by cutting off a slice and coating with a choice of honey (our favorite), jam, or some other such condiment. The dried cream is produced in the vicinity of the Underground City, in a town appropriately called Kaymaklı. It requires much skill to make, taking five days in total to dry out perfectly as on a tray. Various similar types can be found in Erzincan and other parts of the country, but if you are in Kaymaklı, then make the most of it. Plus, as it only expires after around 10-15 days, it’s safe to transport back on the plane.