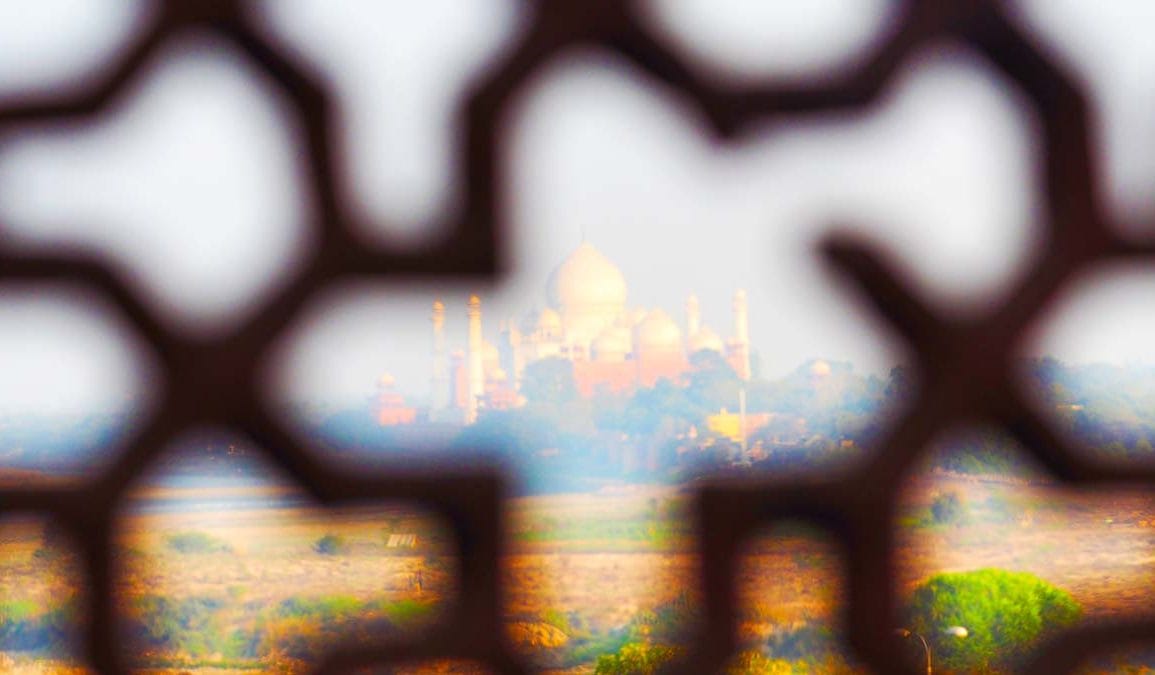 THINGS TO DO IN AGRA – THE HOME OF THE TAJ MAHAL

Though the Taj Mahal, India’s pièce de résistance, tops anyone’s list of things to do in Agra, the rich history of the city makes it home to some of the most beautiful structures in the country. Agra dominated India for over 200 years and was capital of the Mughal Empire, which was founded by Turco-Mongol ruler Babur.

That said, this is not a city where you need to set aside a lot of time: one day is enough to visit Agra. If you spend one day in the home of the Taj Mahal you’ll of course see that glittering white icon of India, the Agra Fort and, if you push hard, you can explore the nearby town of Fatehpur Sikri. If you’re not up for going to Fatehpur Sikri, then another option is to see the small but spectacular Kohinoor Jewellers museum.

Important Note:
Before departing for your trip to India, we definitely recommend reading the following two articles:
– Our Life in India Guide (General information about the country: what kind of place is it for travelers, religion, caste system, misconceptions about cleanliness and everything you need to know before you go)
– Our India Travel Guide (budget, route, alerts, as well as suggestions and preparation tips before you go)

For those of you who don’t have a lot of time in India, we recommend doing the Golden Triangle tourism circuit, which includes Jaipur & Delhi.

PLACES TO SEE: THE TOP THINGS TO DO IN AGRA 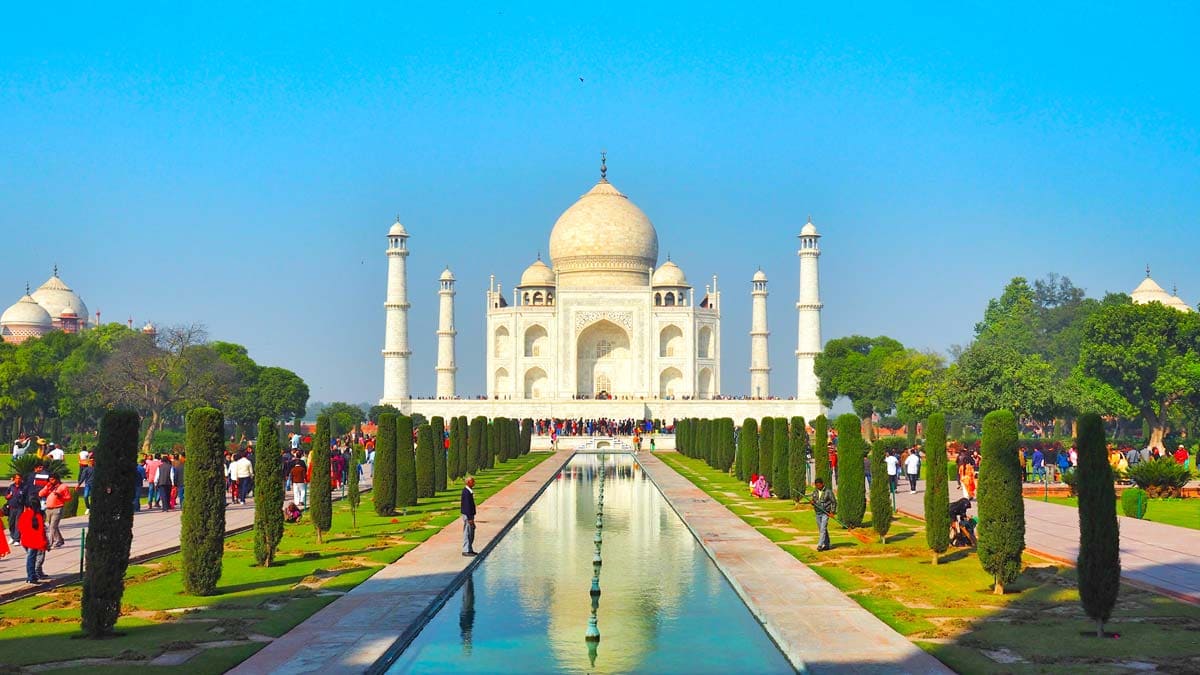 Taj Mahal is the symbol of India and the reason why most tourists visit Agra – and India, for that matter. The building is known for being one of the new seven wonders of the world and is simply a masterpiece. We’ve kept it shore here since we’ve described the Taj Mahal in another article. Click here for the location. 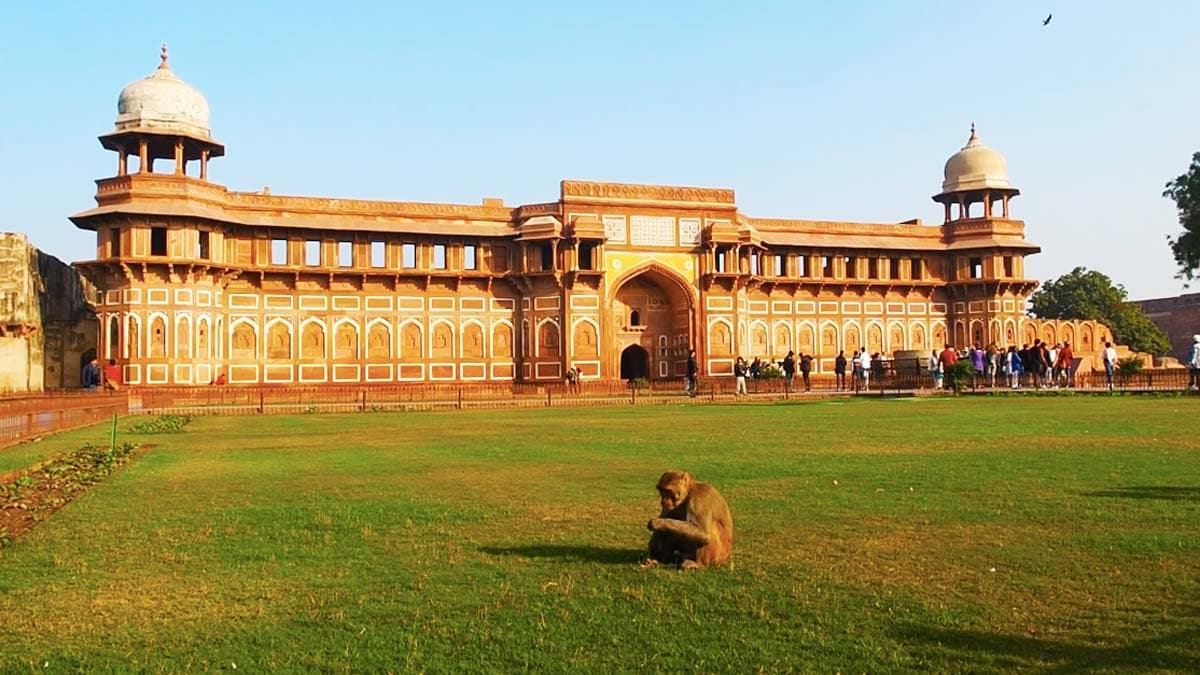 The Agra Fort is right across from the Taj Mahal. No matter how much it lies in the shadow of the Taj Mahal, the fortress is one of the greatest examples of architecture from the Mughal Empire.

Located alongside the Yamuna River, the building’s construction started in 1565 during the reign of Emperor Akbar. Later, his grandson Shah Jahan made additions to the fort in white marble, which was his favorite material. Even though the castle was originally built for military purposes, Shah Jahan turned it into a royal palace.

Unfortunately, in 1658, his son Aurangzeb seized control and put Shah Jahan under house arrest for eight years. The British also used it as a garrison during their domination.

From the side of the fort that faces the grave where Shah Janan’s wife is buried, you can get a really nice angle of the Taj Mahal. There haven’t been many photos taken from this vantage point. This view gets even better at sunrise – in those first rays of sunshine, there’s still morning fog.

If you want to visit both the Taj Mahal and the Agra Fort on the same day, which is our recommendation, then you can get a discount of 50 Rupees from the total fare. Entry Fee: 300 Rupees for an adult ticket and 25 Rupees to take a video. Visiting from sunrise to sunset is possible. Click here for the location.

Grave of the Emperor Akbar

The mausoleum of Emperor Akbar, who was the most important emperor of the Mughal Empire, is located in Sikandra, which is 10 kilometers away from the Agra Fort. If you’re determined to make this one of the things to do in Agra, you can get onto a bus operating between Mathura-Idgah and pay 10 Rupees, and you’ll be there in 45 minutes. Entrance is 110 Rupees and 25 extra for a video. Click here for the location.

Located 40 kilometers away from Agra, Fatehpur Sikri is an old city surrounded by walls. Between 1571 and 1585, the city was the capital of the Mughal Empire before Agra became the capital. According to rumors, Emperor Akbar visited a Sufi religious scholar there and received news that his son was going to be heir to the empire. When this prophecy came true, he decided that Fatehpur Sikri would be the center of the empire, and he ordered a mosque to be built there, which is still open today.

He also built three palaces for his favorite wives – one who was Hindu, one who was Muslim and another who was Christian. However, because the region is very barren and there was a water shortage, the city was abandoned shortly after the death of Akbar. Now, it’s a place frequented by daytrippers and that has been added to UNESCO’s World Heritage List. Click here for the location.

Kohinoor Jewelers is India’s most famous jeweler, and it’s also a museum that has a magnificent collection of paintings that depict precious and semi-precious stones. Established in 1862, the family started the business to make royal jewels, and it’s been passed down through generations. Thanks to their success and the wonderful collection they have, this family business has been featured in magazines from Vogue to National Geographic. The father works with his daughter, who designs the jewelry, and his son, who is a gemologist.

You can look at all the jewels, but there are 7-8 pieces in the museum that you really must see. Each work has distinguishing characteristics, and each has taken 7-8 years to finish. The room where the jewels are housed might be closed, but you can ask them to open it for you. Tel: +39 02 9176 5472. Website. Click here for the location.

WHAT TO EAT IN AGRA

This restaurant is located in the Oberoi Amarvilas Hotel and is one of the most popular traditional Indian restaurants in Agra. They don’t have a wide selection on their menu (a great feature, really), but what they do have is fantastic, particularly the tandoori from North Indian cuisine as well as the kerala shrimp fried rice and shrimp curry.

It’s also important that you book a reservation before going since eating here is amongst the hot things to do in Agra. There are two sessions every evening for dinner – one at 7 pm and the other at 9:30 pm. They have a smart casual dress code and allow children to dine who are over the age of 8.

This is one of the most popular restaurants in Agra, and it’s one of the best places to find North Indian cuisine in town. We recommend that you try the chicken tikka masala, paneer lababdar, freshly cut cheese with spices and onions, as well as other authentic dishes.

Seth Gali Street is an ideal place to try Aloo Tikka (a fried snack with potatoes, onions and curry) and Lassi (a yogurt drink with water and sugar). You can go to Sadar Bazaar for Aloo Chaat (potatoes with spices), crispy Pani Puri and Falooda (a sweet drink made by mixing rose syrup, vermicelli, sweet basil seeds and pieces of jelly with milk). For breakfast, you can find the Bedai and Jalebi duo at Brij Bhog and Bhagat Halwai.

WHERE TO STAY WHEN YOU VISIT AGRA

As the home of the Taj Mahal, the best places to stay in Agra are those close to the majestic structure itself.

This hotel is set on 14 acres of greenery and offers an outdoor pool, four eating and drinking places, spa facilities and more luxurious offerings than anything else you’ll find in town. It’s located three kilometers from the Taj Mahal.
Click here for detailed information and to make a reservation.

The Medieval-style hotel is located in the center of Agra. Prices include breakfast at the hotel’s restaurant.
Click here for detailed information and to make a reservation.

The hotel is situated three miles from the Taj Mahal and sits on a complex that has an outdoor pool, fitness center, spa center and restaurants.
Click here for detailed information and to make a reservation.

This is a family-run business in walking distance of the Taj Mahal. The prices are affordable, and the people who run the business are quite sweet.
Click here for detailed information and to make a reservation. 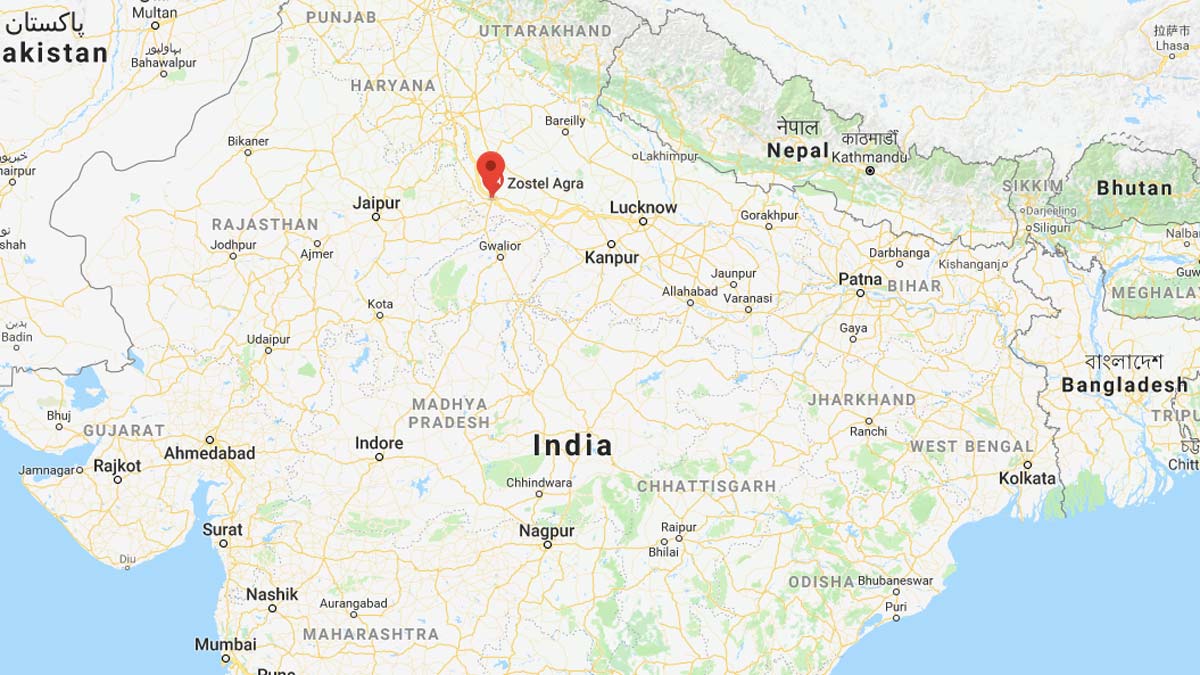 The home of the Taj Mahal is located in the province of Uttar Pradesh, and is a city in the northern part of India near the border with Nepal. It is also north of New Delhi and lies on the coast of the Yamuna River.

The best way to get to Agra is through New Delhi as you’re unlikely to find international flights. However, even Air India does not have direct flights to Agra, and you’ll have to stopover at Varanasi. So, it makes more sense to hop onto a train from New Delhi to Agra. You can choose from the Shatabdi Express, Rajdhani Express and Superfast Express. The journey only takes between two and two and a half hours.

Agra, New Delhi and Jaipur make up the golden triangle tourist circuit in India. People who want to do the golden triangle usually start in Delhi, go to Agra and finish their tour in Jaipur. One of the most popular trains is the Shatabadi Express to take this route. The Superfast Express goes between Jaipur and Agra and takes about 4 hours from one city to the other.

_ . _
Hope you enjoyed our list of things to do in Agra. For our other city guides, you can check our India Travel Guide.