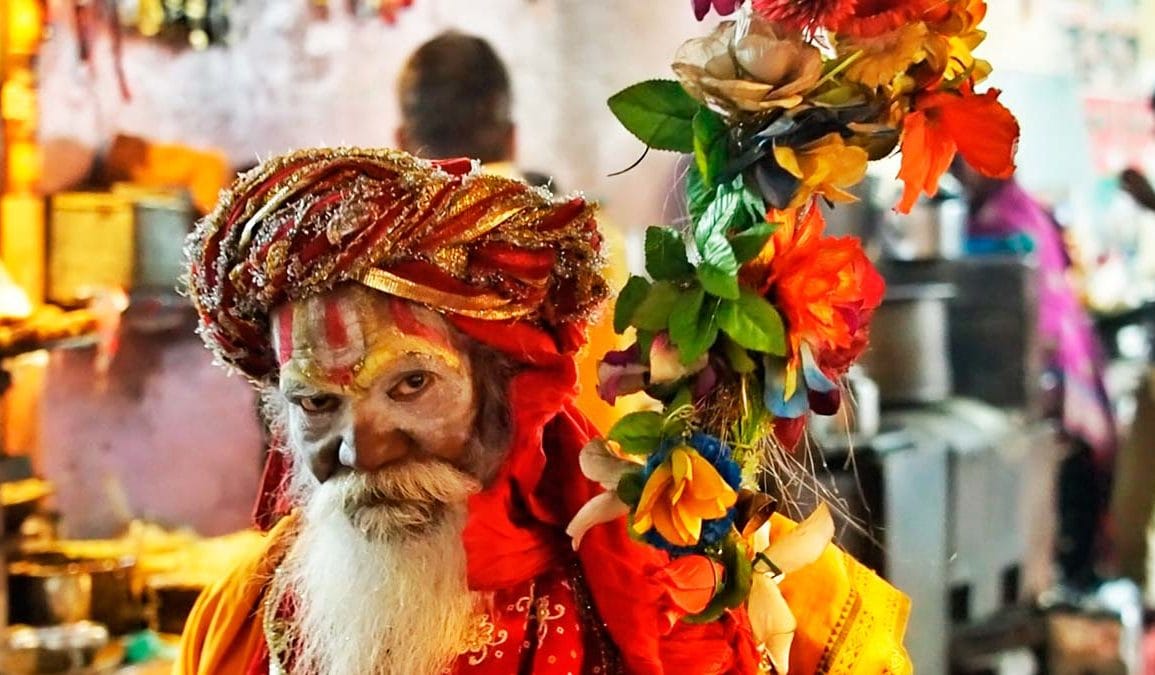 COMPLETE GUIDE TO VARANASI: THINGS TO DO IN VARANASI & WARNINGS!

Varanasi is a place that will move you like no other during your travels. You’ll not have experienced anything like it and, in many ways, nowhere will have challenged you mentally as much. It was the hardest place to travel to in India but also the most rewarding part of our trip.

Varanasi is a sacred pilgrimage site for Hindus. The city has been inhibited for 5,000 years, making it the oldest city with uninterrupted human settlement in the world. Mark Twain once said that the city was “older than history, older than tradition, older even than legend – and looks twice as old as all of them put together.” 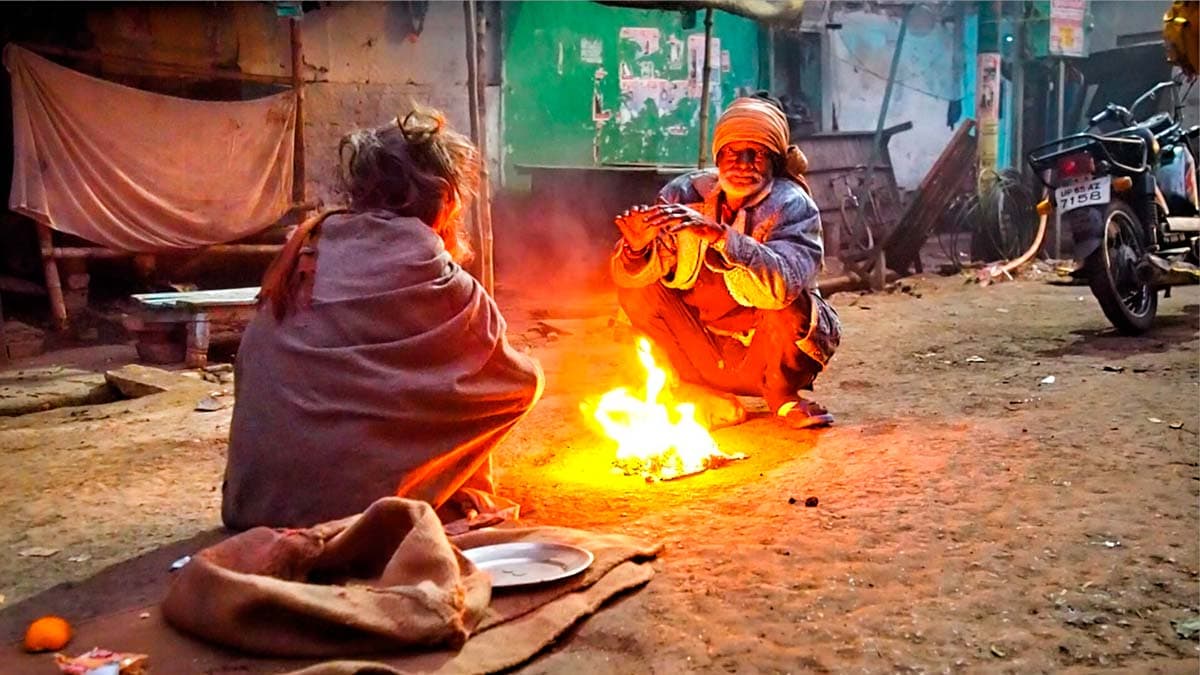 City of Shiva, The God of Destruction

Varanasi is the city of the god of destruction, Shiva. Hindus believe that if they die here, they will be removed from the cycle of reincarnation and become one with God. Emancipation from the cycle of samsara, or death-and-rebirth, and the achievement of nirvana, or enlightenment, is known as moksha.

Thus, the sick and elderly arrive here from all over the country to await death. In Hinduism, when one thinks of things to do in Varanasi, the immediate thought is unsurprisingly morbid. At one time, the city was full of moksha guesthouses, which acted like hospices to look after those expecting their final day to come soon.

However, many of these moksha guesthouses have since been converted into hotels to cash in on burgeoning tourism. Mostly, however, the bodies of those who pass away without making it here are brought to Varanasi for cremation.

City of the dead

Needless to say, the city feels almost like one big morgue. The scent of the hundreds of bodies cremated along the banks of the Ganges River pervades the whole city. We watched a cremation from some 10 meters away and, within an instant, the smell filled our eyes and mouths.

I was gobsmacked at how unremarkable this event was for everyone else around me. But in Hinduism, death is an ordinary event, a brief stop-off on the soul’s endless journey. With this idea, those left behind may be more at peace with this reality…

We recommend reading the following articles before heading to India and exploring things to do in Varanasi:

– Our Life in India Guide (General information about the country: what kind of place is it for travelers, religion, caste system, misconceptions about cleanliness and everything you need to know before you go)
– Our India Travel Guide (budget, route, alerts, as well as suggestions and preparation tips before you go) 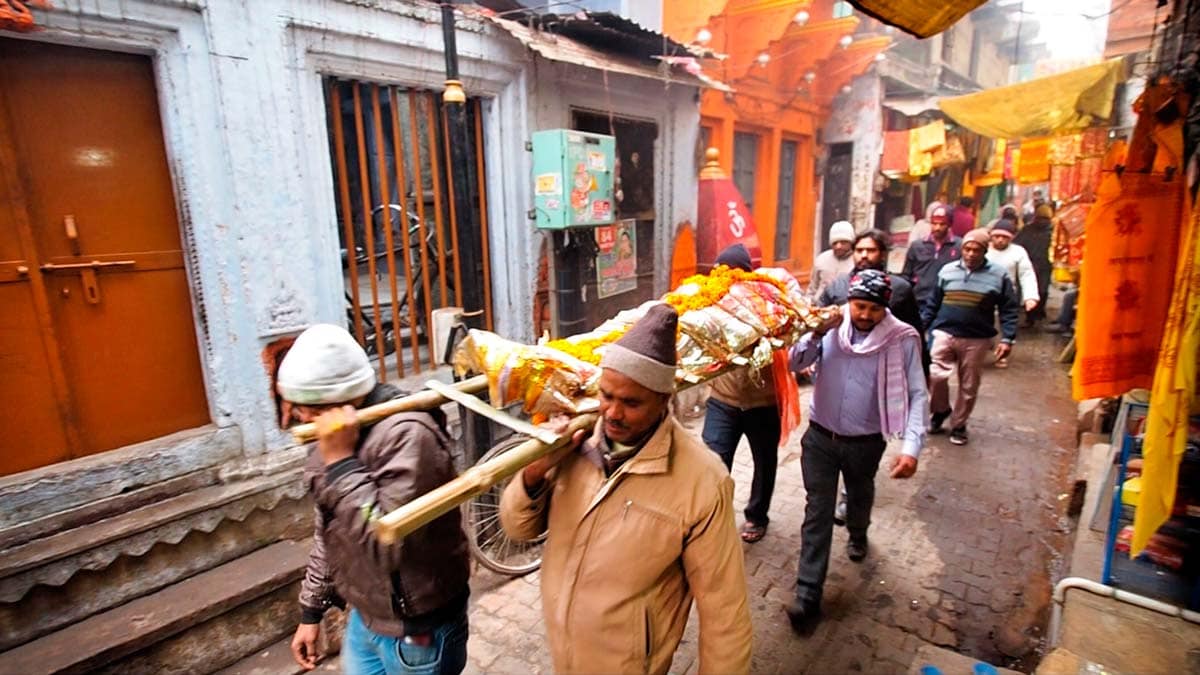 In Varanasi funerals, the body of the deceased is first covered in a white shroud and brought on the shoulders of attendees to the banks of the River Ganges. As there is nothing like a coffin, the body burns in full view. It was rather discombobulating to find myself witnessing a scene like this, but it’s important to remember that those around you see death simply as the soul shedding its skin. Personally, I can’t even pull it together when I see roadkill!

For the people living in poverty in India surviving is hard, but dying isn’t any easier. It takes about four hours to incinerate a body, with around 200-500 kilos of firewood needed depending on the size of the body which can be unaffordable for most. Those who can afford it use sweet-smelling sandalwood, but this is quite expensive. That being the case, many use plywood mixed with sandalwood shavings. The lighting of the wood itself must be accompanied by the blessings of a priest.

Beating the Skulls Open With a Stick

Sometime over the course of the burning ceremony, a stick is used to crack the skull open so that the soul can fully leave the body. Due to the density of tissue in certain areas of the body, like the buttocks on women and chest on men, these parts have trouble burning and are thus thrown into the Ganges.

We had heard that the ashes themselves were also cast into the Ganges. However, our guide told us they were mostly left to blow away in the breeze.

In terms of things to do in Varanasi, witnessing this ceremony definitely comes out on top. Whatever your take is on cremation, it definitely creates room for thought: visually it’s spectacular, morbid, and, somehow, mundane.

Who Can’t be Cremated?

The bodies of children, pregnant women, and saints or those who die from snakebites (snakes are sacred animals believed to have healing powers) cannot be burned in this ceremony. Cremation is to help absolve the dead of their negative karma, but in their cases, there is no negative karma since they are considered to be pure and innocent. This is why the bodies of children under a certain age are submerged in holy rivers like the Ganges, though the government has now mandated that crematoriums must accept children.

1. Get A Local Guide 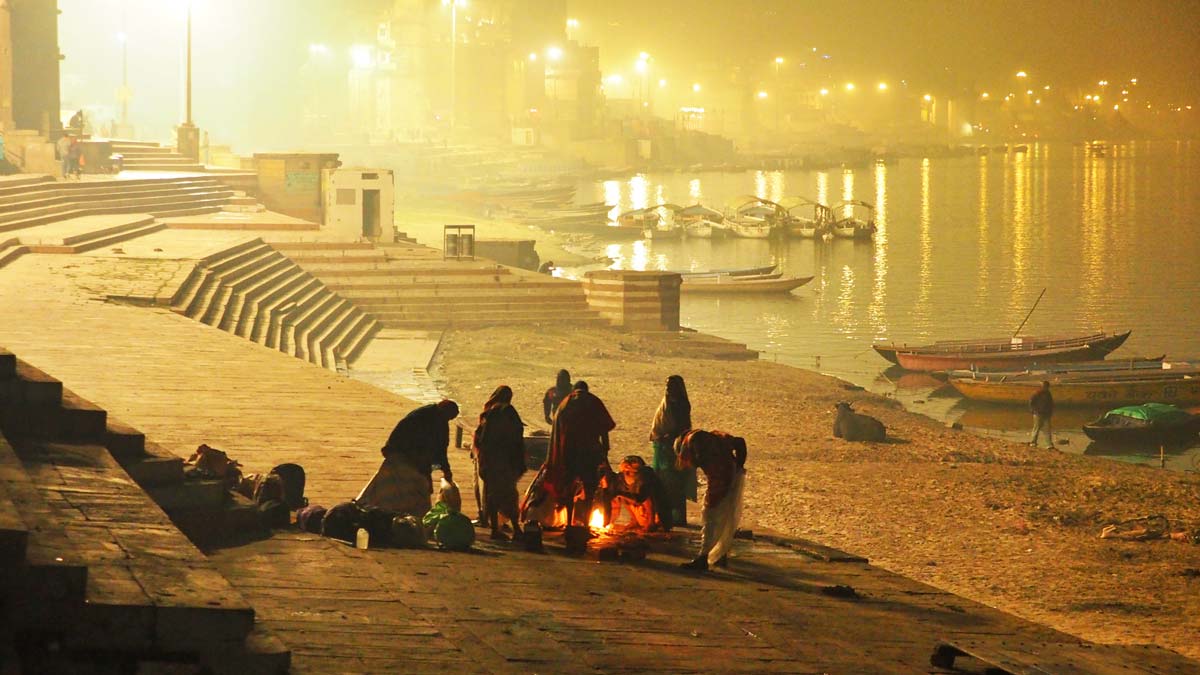 To get the most out of the things to do in Varanasi, it is definitely worth hiring a local guide to help you around. We bumped into our guide by chance when we arrived and bought a full day tour (although, to be honest, a half-day tour would be enough). He asked for 3,000 rupees, but we shook on 2,000, including a morning boat tour (which generally costs around 100 rupees).

We wandered the ghats (the large steps leading down to the Ganges), witnessed a cremation, and explored a number of temples. But the necessity of having a guide is that you’ll have someone who is able to explain the finer points of the Hindu belief system as you see it in action. You can get a grasp of some of the key concepts in our Hinduism article. If you want to hire our tour guide, his Facebook page can be found here. 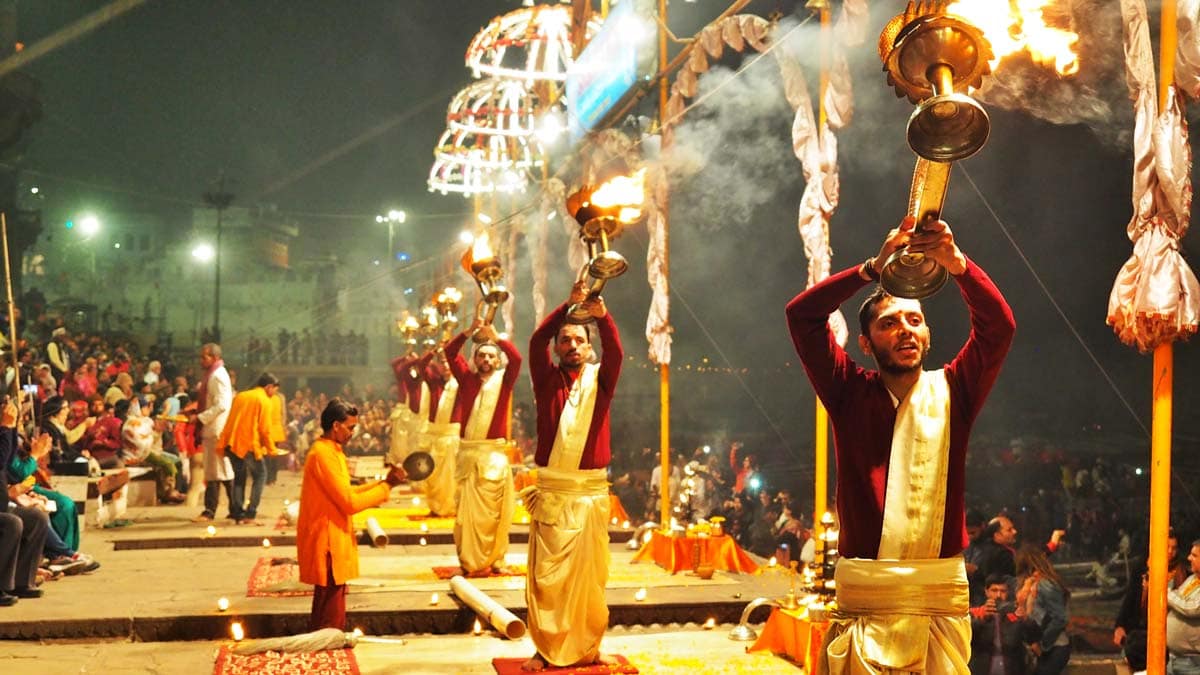 If there are only two things to do in Varanasi, one is watching a cremation, and the other is the Aarti. Aarti is a fire ceremony performed for the gods and the River Ganges. This ceremony is performed by priests along the banks of the river every night without fail and attracts pilgrims from all over the world – not least as Varanasi holds an important place in Hinduism, Jainism and Buddhism.

The ceremony begins at 18.30 during the winter and 19:00 over the summer and can be seen at the Dasaswamedh and neighboring ghats. 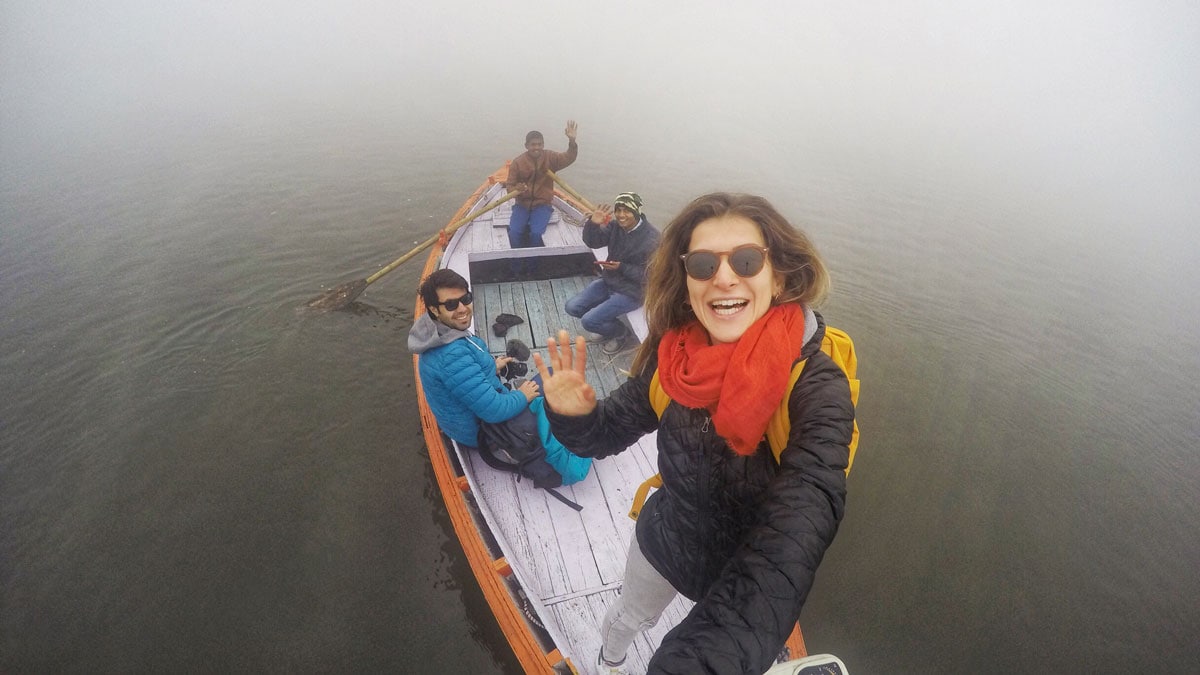 A tour with a local guide will generally begin with a boat tour, but if you are going to wander around solo then you should definitely hop on a boat at around 7 am. The boat takes you to the great crematorium on the other side of the river. As we chose a rather misty morning to arrive, however, there was not a lot we could see.

Then again, being enveloped in mist accompanied only by the sound of bells ringing is the eeriest, most enchanting of things to do in Varanasi if you get the chance! Plus, it was interesting to see people who had come to wash and be blessed by the river next to those washing their laundry. Winters in Varanasi can be rather chilly – so make sure you bring a coat! 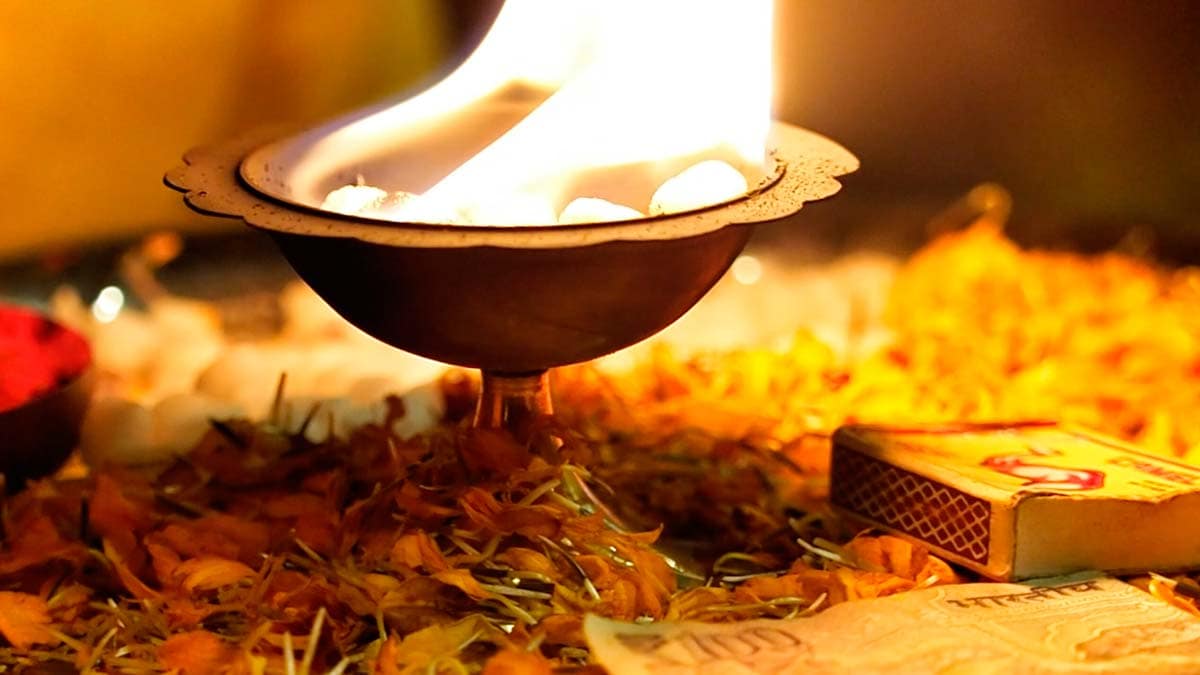 This might sound morbid, but cremations are public affairs that everyone can attend, though understandably it is forbidden to take photos or shoot films of them. Unfortunately, this rule is open to the effects of the market, and for something like 6,000 rupees, they will apparently allow you to record. Out of respect, please don’t do that.

As we stated above, greeting death is at the top of most Hindus’ list of things to do in Varanasi – but many more have their bodies sent here to be cremated along the river. The most accessible and oldest of these cremation spots is the Harishchandra Ghat. 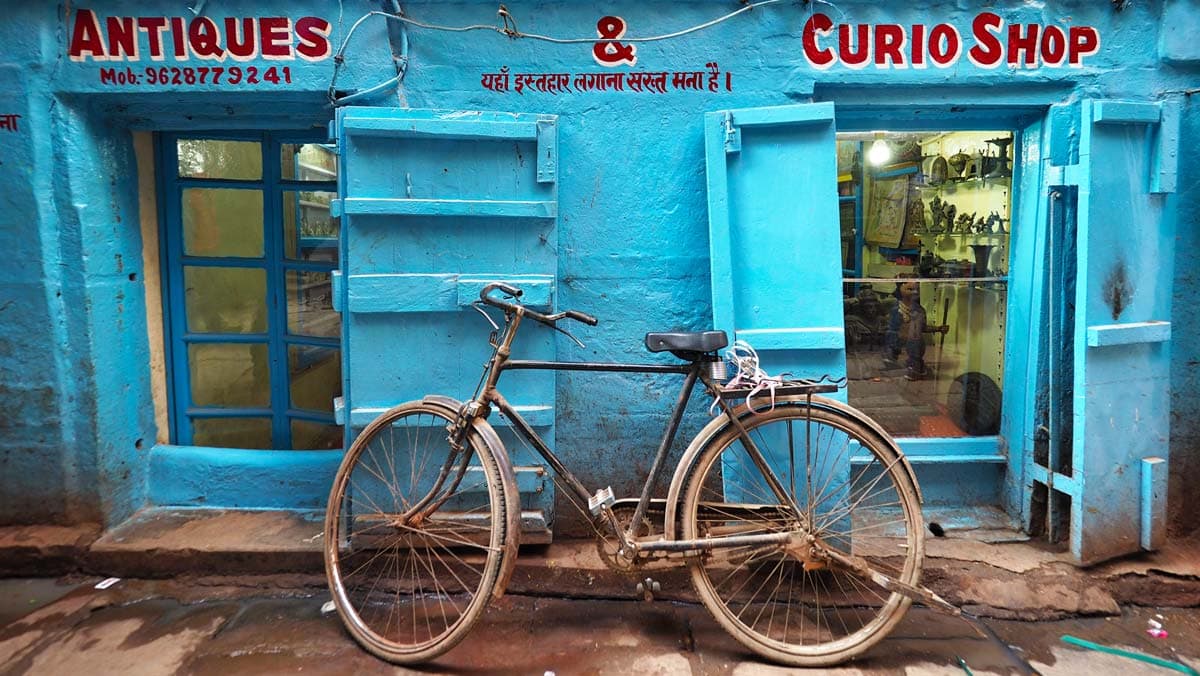 This is the nicest of the things to do in Varanasi. The Bengali Tola Road has a number of cafes, souvenir shops and tour offices– not to mention Indian instrument shops. Be sure to drop by. And also sample the local lassi (a flavored yogurt smoothie-like drink) while you’re at it!

How Long Should I Spend in Varanasi?

Varanasi, unfortunately, has some of the worst conditions we witnessed during our time in India. And we saw it during a good time of year, monsoon season when the water carries the sewage and waste down the river! However, during the summer, the air apparently becomes fetid with decay.

Then there is also the smell emanating from the cremated bodies that lingers over the city. But it is certainly a place worth visiting, and some of the things to do in Varanasi will be unforgettable. So, if you visit Varanasi, we recommend one day as this should be enough to see everything.

Important Information When You Visit Varanasi 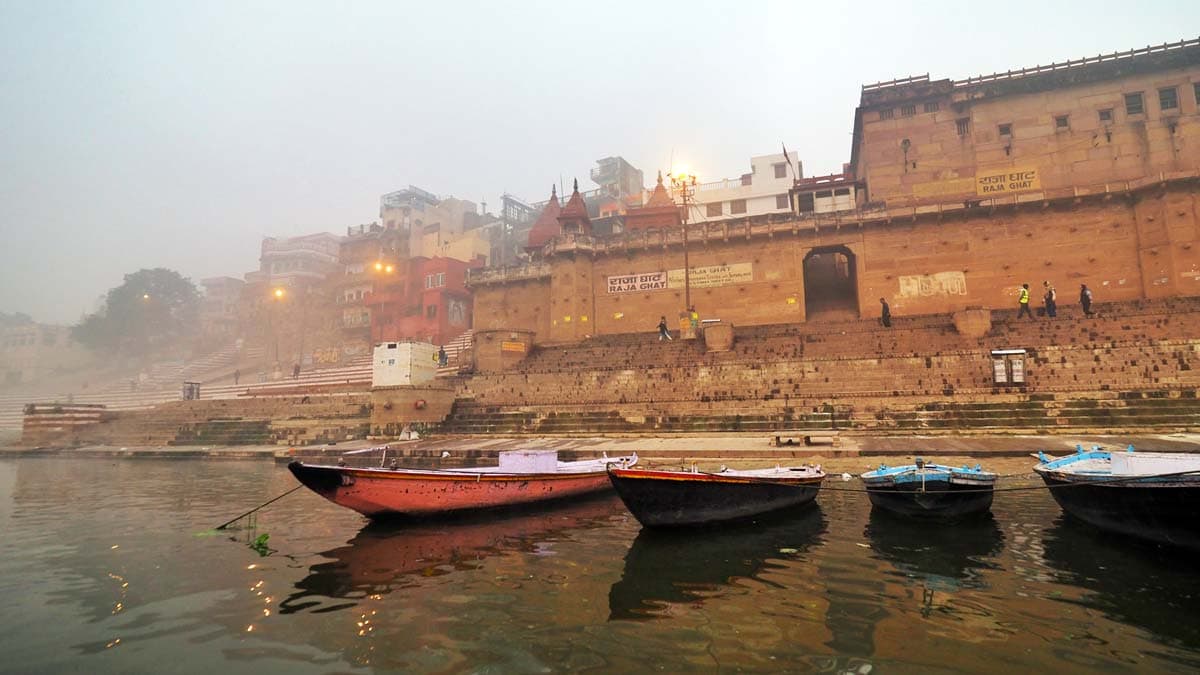 Don’t Go Into the Ganges!

Pilgrims who come here from all over the world can’t wait to throw themselves into the river for blessings – but we would caution anyone else from following suit. The Ganges is, unfortunately, one of the most polluted rivers in the world, with sewage systems, chemical waste and bodies (cremated or not) all ending up in the river, not to mention the sick seeking out its healing properties. Needless to say, the Indian government itself has been trying to warn people about the risk for years. So if you are looking for things to do in Varanasi, don’t even think of taking a dip.

Mind what you eat

In Varanasi, hygiene is not quite highly regarded, so although it would be nice to adapt to the local way of life, remember that locals have a better adapted immune system. Be careful where and what you eat.

Don’t risk it with hotels

One of the first things to do in Varanasi is to book a clean hotel. There may be only two. The Tridev Hotel is the newest and best in terms of cleanliness. The fact that it is a little further out of the hotel district is also a plus, as this area has narrow streets that vehicles can’t access. Staying in this district means you’d have to lug your baggage through the streets for a part of the journey. Breakfast is included in the cost and they will help you organize things to do in Varanasi if you ask. Click here for more details and booking information.

Don’t Fall for these Traps!

Have a good shower when you get to the hotel!

You won’t realize quite how pervasive the drifting ashes can be. 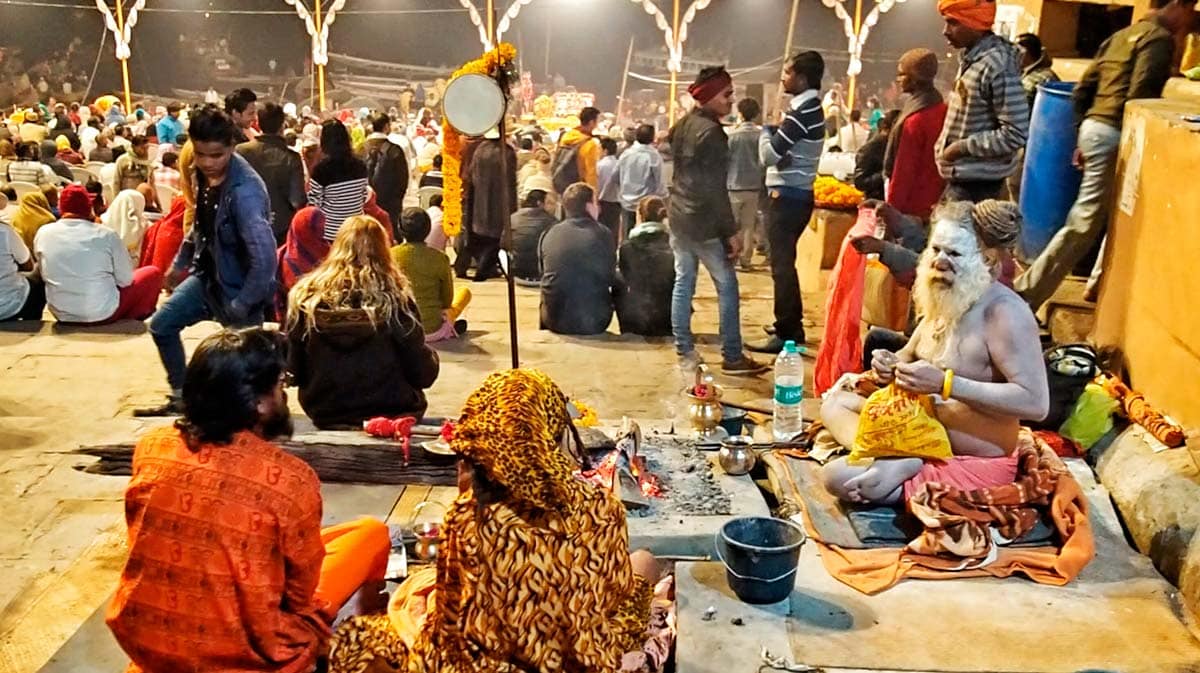 A word on the Sadhus

The banks of the Ganges are dotted with small groups of Sadhus. These Sadhus cover their faces and bodies with the ashes of the recently cremated like body paint. They often use psychotropic drugs as a means of remaining in touch with spirituality. But be warned, this is in no way a legal practice, and India has extremely severe laws that apply to people in possession of the slightest whiff of drugs.

Paan – This a herb for chewing, like tobacco, wrapped up in a betel leaf. This is available all over India, but nowhere more so than here.

Lastly, don’t forget to make a wish and cast an offering into the Ganges (Candles are sold in the evening in the ceremony lines). 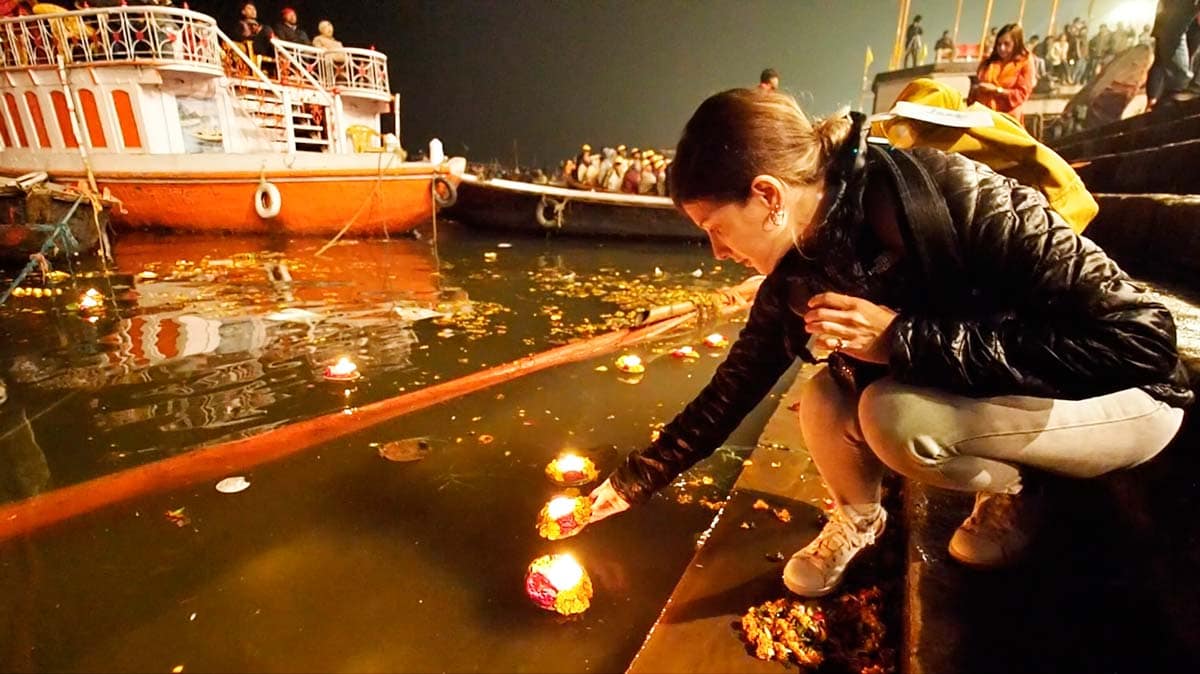 _ . _
Hope you enjoyed our list of things to do in Varanasi. For our other city guides, you can check our India Travel Guide.