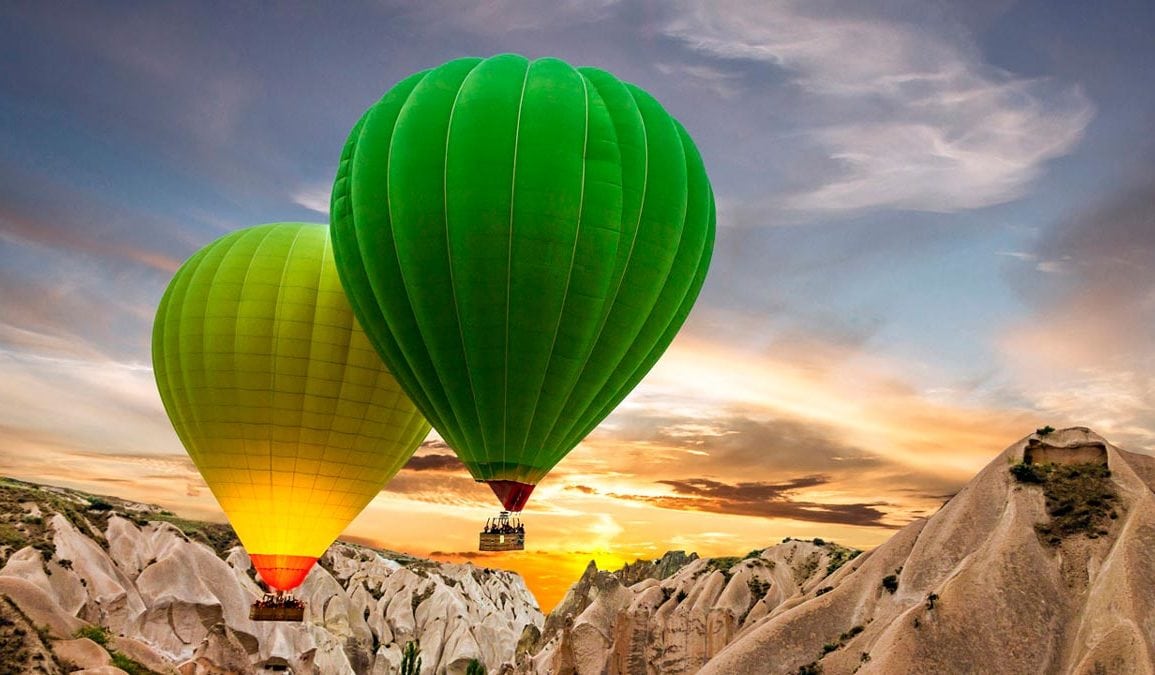 One of the most incredible and breath-taking tourist activities, perhaps in the whole of Turkey, involves setting off on a Cappadocia balloon tour, rising up with the area’s stunning valleys and rock formations at your feet. This article gives you the lowdown on what to expect, how it works, who it suits, when, where, and with which company to ride with.

Are the Hot-Air Balloons Safe to Ride?

The first question asked when it comes to Cappadocia balloon tours is in regard to safety. However, ballooning is the safest form of air travel. Statistically, balloon accidents are next to zero in likelihood in comparison to other transportation methods. But if your concern is more with the pilot than the balloons themselves, then let’s be clear: Turkey’s Civil Aviation Authority is extremely strict when it comes to handing out operating licenses and legal certification is an absolute must for anyone operating a Cappadocia balloon tour (or any, in fact).

In terms of equipment, all operators must follow stringent regulations and never fly without a license. However, if you are not convinced, then the real issue may be a degree of vertigo. If you are likely to panic, you’ve just had an operation an need to relax, or are pregnant, we would warn you to err on the side of caution. A Cappadocia balloon tour is about more than just the view, it’s about the thrill of being airborne! This last point isn’t so thrilling for everyone. 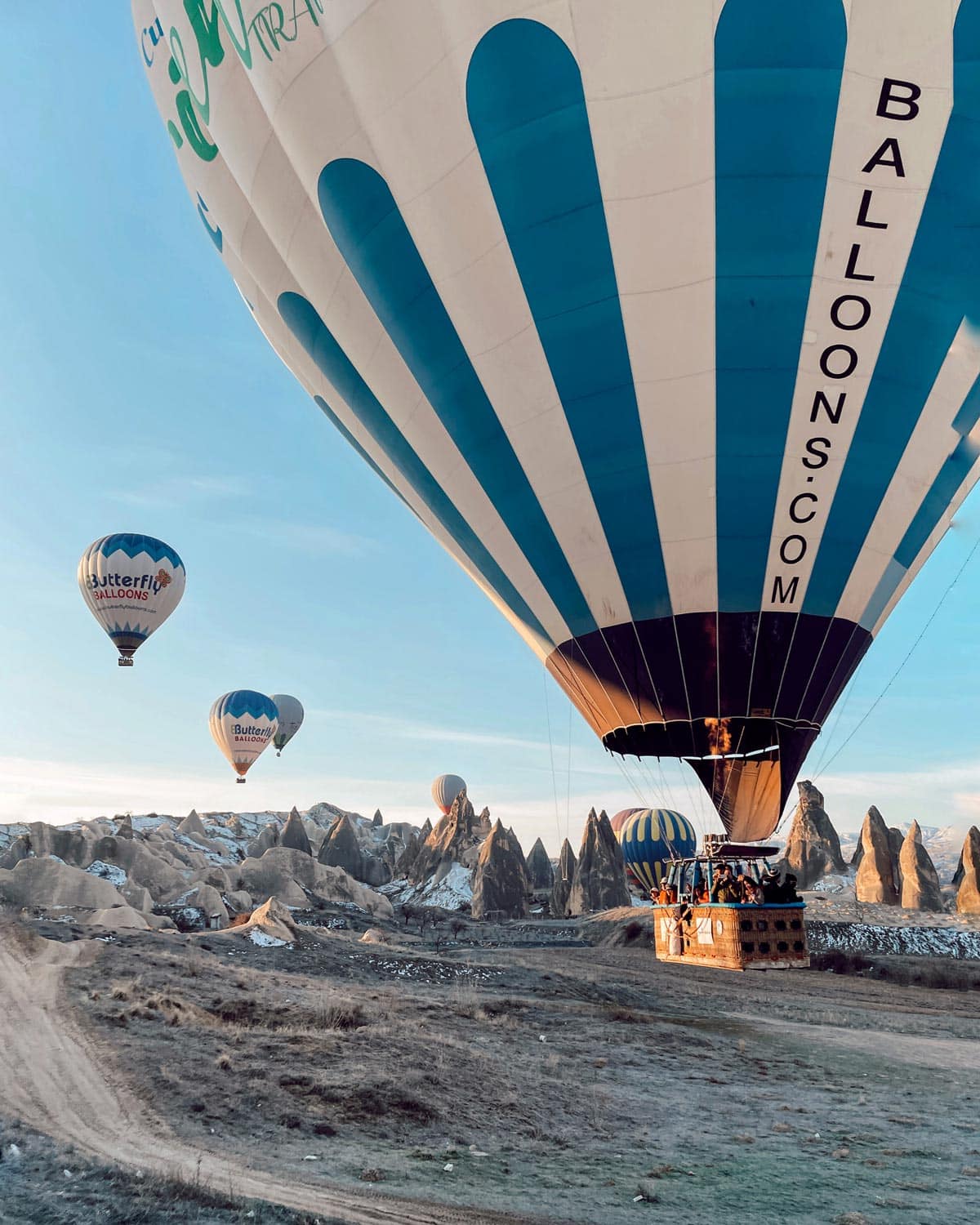 How does Weather Affect the Balloon Tours

Balloons can fly in many sorts of weather conditions. Given this, and the fact that Cappadocia is beautiful all year round, you can enjoy a Cappadocia balloon tour at any season. The only thing that can throw a spanner in the works, however, is wind. Rain is not a problem providing it is not torrential, but gale-degree winds can sometimes ground a balloon all day.

Luckily, such conditions (which are more common around winter) can mostly be predicted ahead of time, so you need not to fear.

Good to Go or No?

Whether any single Cappadocia balloon tour goes ahead or not is entirely dependent on the good folk at the Civil Aviation Authority. In order to prevent any accidents, the authority signals a red, yellow, or green flag. They update their website every half an hour to reflect any significant changes.
– Green, evidently, means the ideal weather conditions for a Cappadocia balloon tour are present
– Yellow means that all rides must stop until further notice is given.
– Red, on the other hand, means all rides for that day must be canceled.

All companies offering Cappadocia balloon tours make a point to keep customers and those interested in tour updated about any changes online. 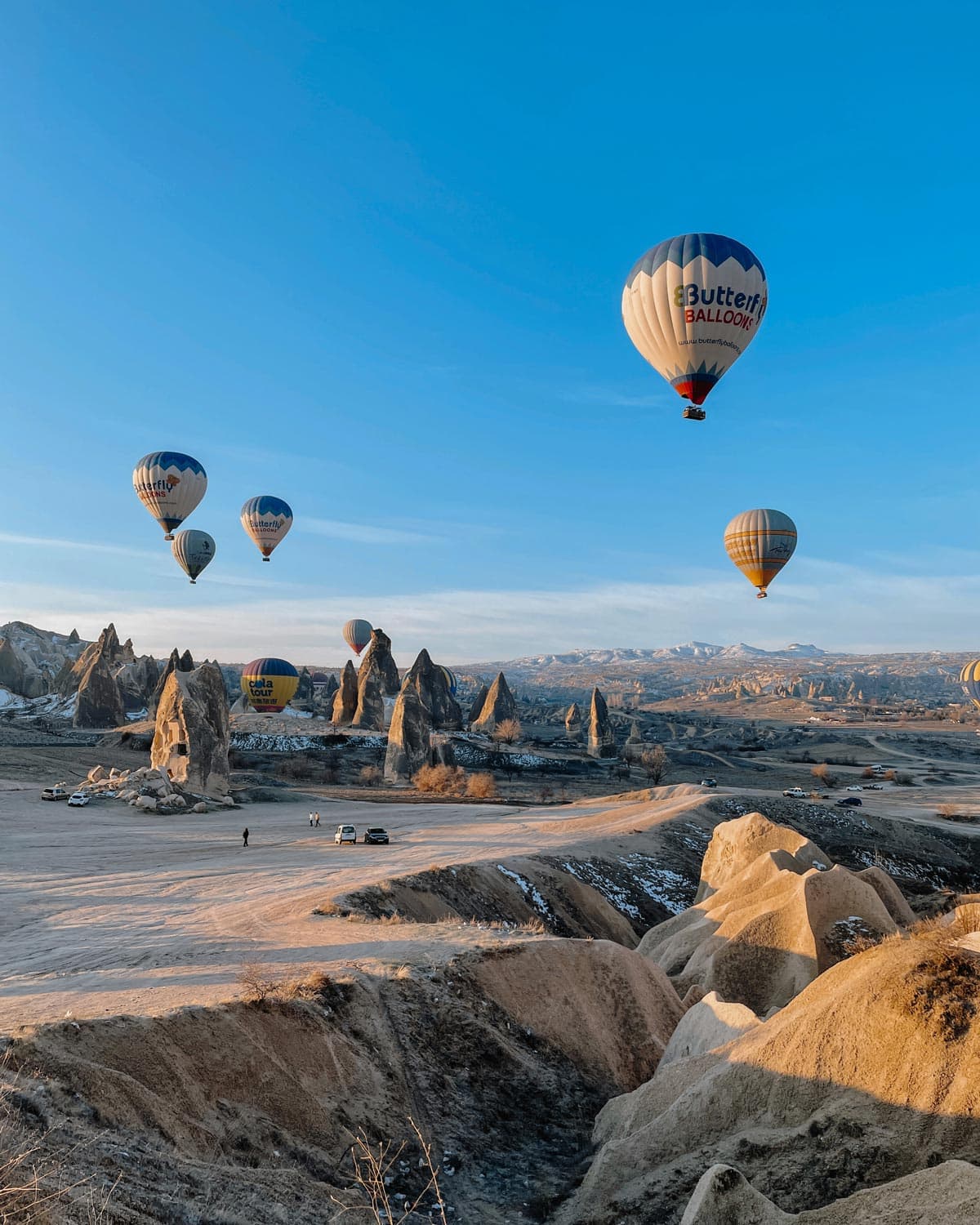 If you’ve decided you’re game for a Cappadocia balloon tour, make sure you book a day in advance. This way, you can guarantee a place and often benefit from an early bird discount.

The daily schedule for rides is the same for every company operating in the area:

– The company service will pick you up from the hotel between 04.50 – 05.30 when it’s still dark and take you to the company offices for breakfast.

– Once the Civil Aviation Authority has given the green light for balloon rides, you are shuttled to the take-off point and given a briefing. The balloon is then readied and you jump inside, strap in, and away you go!

– After landing, you’ll be treated to champagne (non-alcoholic, if you prefer) and a few treats, as well as a souvenir photo. Then, it’s time to receive your completion certificate before the company drop you back off at your hotel

– The whole process, including pick-up, hour-long ride, and back to the hotel takes around three hours in total. 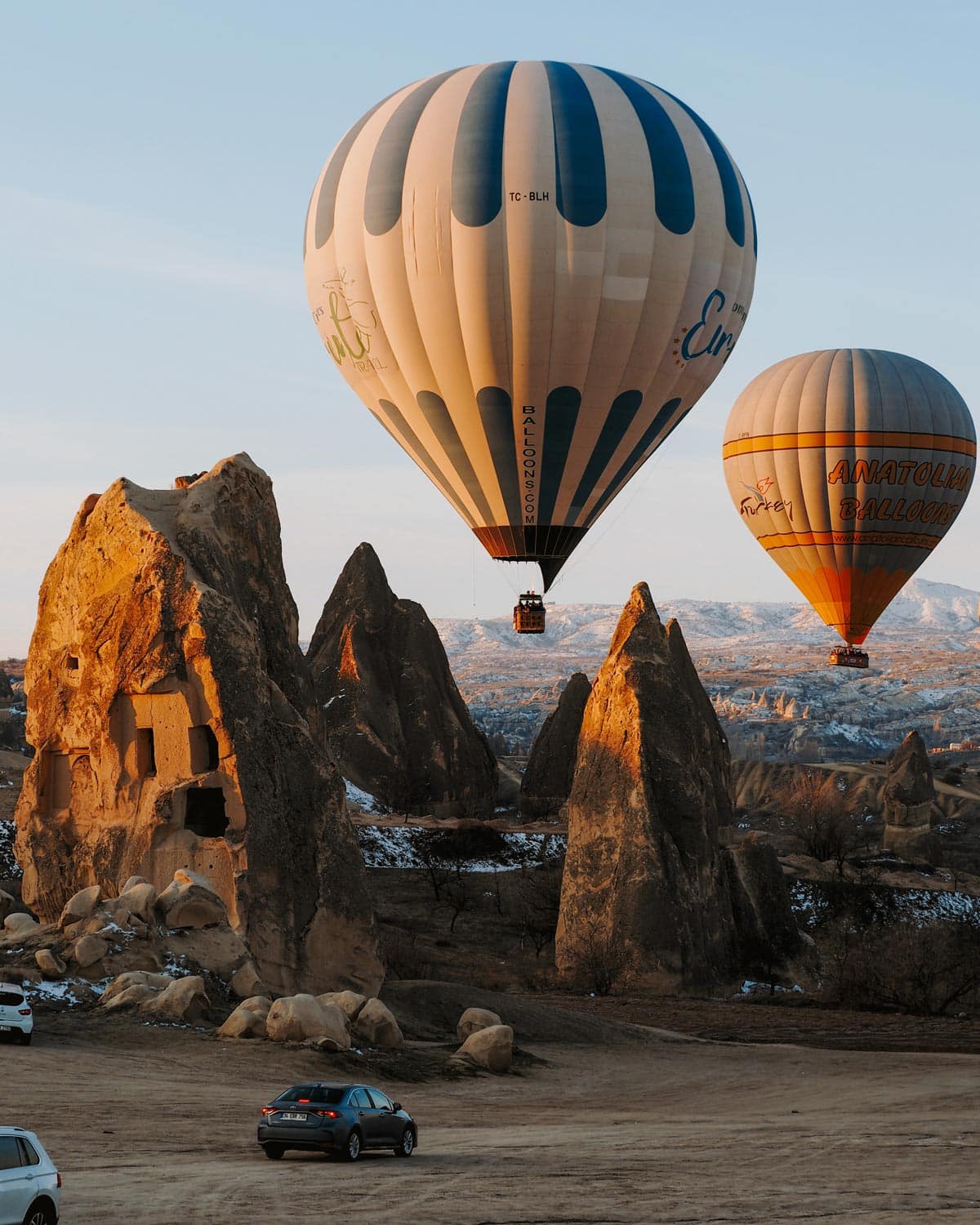 Given how expensive it must be to operate a balloon company, the costs are understandably steep, but they vary according to the demands of the season. By the end of the tourist season prices can go down by as much as half. The prices may also increase on bank holidays and if there are any luxury requirements desired additionally.

You won’t find yourself accompanied by so many other balloons in the sky after the tourist season ends, but the advantage is that you’ll at least find yourself sharing the basket with less people, giving you more room to move around. Prices range from 80 Euro (at the end of the season) to around 180 Euro and rides last one hour.

There are around 25 different companies operating Cappadocia balloon tours, but the original and most well-established is Kapadokya Balloons. Our preference was for Butterfly Balloons however. Going first thing in the morning gives you the best views, and you’ll be accompanied by most other balloons at this time. Throughout the day, another 50 balloons tend to go up, weather permitting.

– Make sure you know about weather conditions beforehand. Check out the forecast before you arrive, and we’d even advise you to call the balloon operators ahead of booking.

– Companies generally call you up to enter the basket when the balloon is ready, but we advise you to ask if you can watch the inflation process from the beginning, as it is rather fascinating.

– Make sure you don’t lose accessories like a hat or your glasses on your Cappadocia balloon tour.

– Don’t forget that early mornings can be very breezy and cool, even in the summer.

How Does It Feel?

Here is our experience:

That morning, it was time to get our own back on the rooster who had been driving us insane with his cock-a-doodling every morning and ready ourselves for a pre-dawn counter-attack. Unfortunately, in the end, we didn’t have time to carry out our evil plot, as we spent those precious minutes hurrying to get ready for the shuttle bus that had arrive to pick us up. In typical fashion, we barely had time to put our shoes on by the time we got on board. Luckily, the ride was long enough that we could make ourselves somewhat presentable. Bilge corrected his misplaced buttonholes as I attempting to fix the state of my hair. Before long, we arrived at Butterfly Balloons, the night still thick upon us.

Although it was summer, the time of day (verging on the night) means there is a chill in the air. Perhaps if we’d have set the alarm a little earlier, we would have thought to put on a few more layers on. I would say “next time,” but who am I kidding – this is a once in the lifetime thing. The sun was on the way toward the horizon as we and the other passengers started filing into the basket. One of the operators came up to us to ask if we’d eaten. We had barely had time to dress, let alone consider our rumbling bellies. The kindly stranger then ushered us to have a bite. Well, it would have been rude to refuse, so we had a quick fill of pastry and a dose of tea. 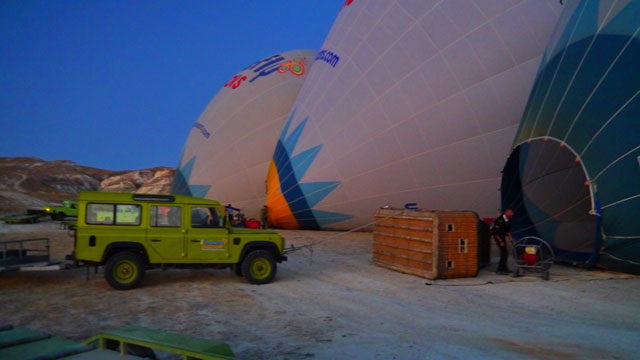 And So It Begins…

It seemed that all we needed was a little fresh air and a good breakfast and we were back to our normal selves. At this point, we met the pilot and began badgering him with questions about his art. “We want to see how a balloon works – can we go and watch you get everything ready before the group gets on?” we asked. He seemed pleased to bid us we follow as he and the team readied the balloon for take-off.

With darkness still upon us, and only the lights of some passing cars forming the only hints of light in the distance, the team – as well as the surrounding fairy chimneys – all disappeared and reappeared in view. Our senses were knocked out. While I could hardly have gotten ready myself that morning, the camera was insistent in its slumber. I tried and tried to get the camera working but to no avail.

We came to a completely flat opening. The balloon material had already been spread out flat across the ground. There was nothing else there but the ventilators chugging along inflating the balloon. We entered the basket as it was still puffing up and began rising as the material began to inflate boldly. We were swamped in material on all sides as it began to fill. We began giggling, as take-off now seemed almost imminent.

But for a while, the feeling was akin to that of being a child, hidden under a dining table that had been transformed into a rather sophisticated den with the aid of a large blanket. We, ourselves, suddenly felt we were rising along with this great blanket, being cast off into another world! As the ventilators wound down their ferocity, we popped up, like a car shaking off the snow in winter. And within five pumps, we were all grown up again.

At the heat of the blasters, we fell back inside the balloon. The sun was still obscured from view, but daylight was making its presence known across the sky. The other balloons gathering propane and funneling their way skywards formed almost a constellation of stars.

One by one, they began to ascend. Suddenly, it was chocks away – the tentacles tying us down cut off to bless our rise. The sky was covered with a sea of balloons in every direction as we submitted ourselves to the heavens swaying gently with the wind, one smattering on a sky-born palette levitating above the earthen canvas of the terrain below. Although we were likely the ones swaying in the breeze, no wind seemed to enter the basket itself, and it almost seemed logical to accuse the ground of being the one swaying. 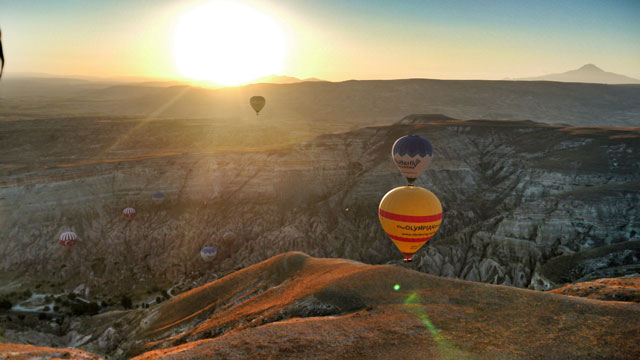 There was no tumult, no noise. We simply flowed with the gentle harmony of nature. Balloons are silent, solemn creatures in their way, and those inside sit stunned into a respectful imitation. The village hovels lay in slumber in the valleys below. Only the bakers had emerged, loading their vans with produce for the day, and we saluted the sea of fairy chimneys still ungleaned by other travelers in the region. The sun began to coat the sky in a layer of purple, before lacquering on a lighter shade of pink. We then rose high enough to take in Cappadocia in all its glory. Only a flash of camera and the odd fire of the blasters awoke us from the hypnosis the view had coaxed us into. This land is really something else…

We began to depart from the rest of the cluster of balloons, going boldly out into the steppe. As we began to descend, a vehicle seemed to be pulling towards us through the dry meadow below. The pilot told us to enter the landing position, so we sat down and strapped in for landing. 1-2-3… And back we were. Before time was up, the pilot began deflating the balloon.

Already intoxicated by the views, it was at this point that champagne was uncorked. Our camera memory was full, and as we are not seasoned champagne-drinkers, our cheeks would remain rosy throughout the rest of the day. We climbed aboard the shuttle and bade farewell to the balloon, now deflated and adrift like flotsam on the shore. An thus ended our Cappadocia balloon tour. 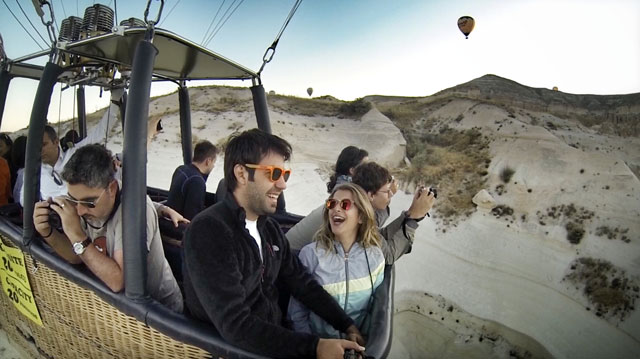