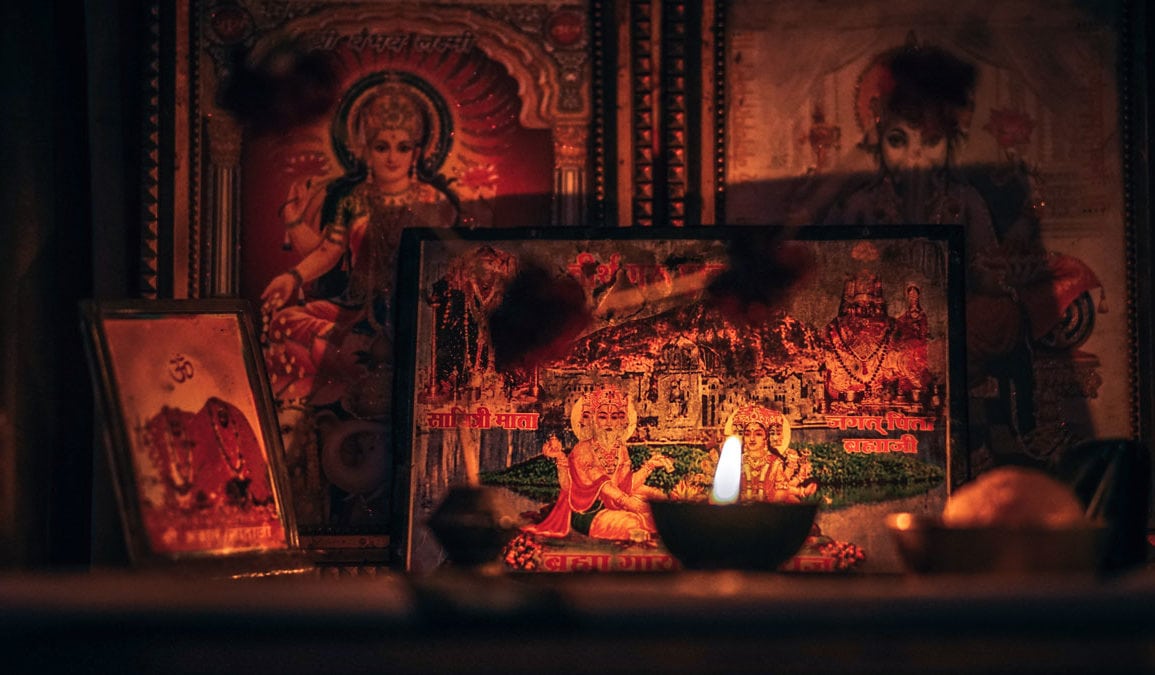 RELIGION IN INDIA – WHAT IS HINDUISM AND WHAT HINDUS BELIEVE

Understanding religion in India is very important for grasping Indian’s ways of living as Hinduism governs most aspects of life. Upon returning from a long vacation in India, we wanted to pass on our learnings to you. So in this blog post, we will attempt to explain the basic principles of Hinduism, what Hindus believe in and role of religion in India.

We tried to keep it as simple as we can. As you can tell we are outsiders trying to understand what Hinduism is. If you think we over-simplified or misinterpreted anything please feel free to correct us.

India is home to several religions, but the most common is Hinduism at 80% of the population.

Nepal and Bangladesh also have significant Hindu populations as well. Traditions and rituals vary from region to region. In this article, we’ll briefly summarize the most essential points about Hinduism without going into too much detail.

Let’s take a look at the distribution of religion in India:

– 80% of the population is Hindu. Other religions include (the percentages are rounded):
– 13% Islam (The Muslim population is spread throughout the country)
– 2% Christianity (in Kerala, Goa, Tamil Nadu and Meghalaya)
– 2% Sikhism, (Punjab region)
– 1% Buddhist (in the Maharashtra area)
– 0.4% Jainism (in the regions of Maharashtra, Rajasthan, Gujarat, and major cities)
– 1.6% Other (Judaism, Zoroastrianism, Bahá’í, tribal religions).

Jainism and Buddhism formed in response to Hinduism, but all three have similar teachings.

When looking at these percentages, keep in mind that while 0.4% may seem like an insignificant number but when you consider that fact that India has a population of 1.3 billion, it amounts to a huge number of people. 5.2 million to be exact 🙂

Hinduism is a mystical religion that has no books and no prophets, but followers believe the Brahman as a creative power – everything comes from and goes back to Brahman.

Because there are so many gods and goddesses in Hinduism, it’s often perceived as a polytheistic religion. However, followers believe that Brahman is the only god and that the other gods are different manifestations of him.

These are the gods that you’ll often hear about in association with Hinduism:

– Brahman – creator of the universe
– Vishnu – God of keeping the universe in balance and harmony. Vishnu shows himself in different forms based on the situation, and he takes many different forms such as Rama, Krishna, and Sarasvati.
– Shiva – God of destruction. Followers believe that the universe was destroyed by Shiva from time to time and created again by Brahman. Cycles are a significant symbol for Hindus.
– Ganesha – God who lifts barriers and brings luck. Ganesha is depicted as having an elephant face and a human body.

– Vedas is the equivalent of the holy books: While there is no holy book, there is a doctrine known as the Vedas that has been transmitted orally generation by generation for 5,000 years. Hindus believe that the Vedas is the promise of God that came through revelation. Although the Vedas has different interpretations, there are a few important beliefs that are common amongst all Hindus:

– Truth is timeless, infinite, and unique. But the truth can be expressed in different ways and can be reached by using different methods. This belief is one of the main reasons why Hinduism is perceived as an inclusive and tolerant religion. Because, from a Hindu’s point of view, there are endless ways of worshipping, and all of them are valid. What matters is the intention not the method. In this way, they see that all religions are valid ways of reaching God.

Although there has been some division over this issue among Hindus, “unity in diversity” became a widely accepted concept  in contemporary Hinduism.

– Brahman as no form, it is limitless, infinite, and omnipresent. It may sound as Brahman is an abstract concept, but it is rather treated as a body that includes everything, the whole realm, inside it.

– Dharma is “the moral order of the universe and a code of living that embodies the fundamental principles of law, religion, and duty that governs all reality”. According to drahma, every individual has a duty and she/he has to make sure it happens. (Read more here)

– The pursuit of dharma allows humanity to get to the higher truth, and the person who arrives here reaches moksha (like nirvana).

– Atman is the immortal soul; in other words, the soul cannot be created or destroyed.

– They believe in reincarnation, and the soul continues to come back to the world again and again until the soul reaches maturity (or reaches moksha).

Reincarnation is not really something desirable, each soul strives to get liberated from the cycle of reincarnation. Liberation only happens when a soul matures enough to reach moksha. Then a soul can escape the cycle and be one with Brahman.

So what is desired is breaking the cycle of reincarnation and integrate with Brahman. Followers of Hinduism believe that if they die in the holy city of Varanasi, then they will be liberated from reincarnation. For this reason, many elderly or sick people go to Varanasi and wait to die there. It’s a very interesting place to see in India.

– Followers think that their body and the circumstances of their life are a result of karma from their past lives. In other words, everyone creates their own destiny.

In Jainism, this is so important that they don’t eat plants such as root vegetables and lettuce as doing so would be killing the plant and the microorganisms which live off of it.

Rishis are people who can reach divine truths and who can act as a bridge between gods and people. However, the concept of prophecy is different in Hinduism; prophets are not special people chosen by God. People whose souls have matured through reincarnation can get in touch with god and can provide people with divine truths.

The most well-known and controversial aspect of Hinduism is the caste system, which divides society into four hierarchies of professions.

From the second that someone is born, they are assigned a place in society, which dictates where they can work, which social areas they are able to interact in, and with whom they can marry.

People are expected to obey the life set and the duties that have been assigned to their caste. If someone doesn’t follow the rules, then this is considered immoral.

1st Caste Brahmans – This caste is made up of religious clergyman. They are at the top of the hierarchy.
2nd Caste Kshatriya – This is a class of warriors and rulers (kings and princes. Their duty is to protect the clergymen and serve the faithful.
3rd Caste Vaishya – Vaishya caste is made up of merchants, and it’s their duty to ensure the economy remains running. In modern times, this is business people and bosses of industry.
4th Caste Shudra – This is the labor and servant caste, and their mission is to serve the other three castes.

And then there are the untouchables, who are seen as not being worthy of being included in the caste system, and they do all the jobs that are seen as being “dirty” such as cleaning toilets.

Karma is the belief that all the good or bad you do in life will return to you.

In Hinduism, karma does not just follow you in this life, but it also affects you in the next life. As we are traveling throughout India, we saw extreme examples of poverty and wealth side by side. How it’s fair that millions live on the street right next to a 27-story house that hosts a family of only six people? I could not help but wonder why people do not revolt. I was explained that they accept their situation as a result of their karma, something they call upon themselves. They think they must have done something in their past life to deserve their current life.

When it comes to setting rules, Hinduism has a soft approach. There are no banes or prohibitions, instead, there are suggestions to help increase your karma and warnings about what could hurt your karma. While alcohol and meat consumption is not forbidden, but it’s not recommended. Because of the principle of “do no harm,” many Hindus are vegetarians.

In Hinduism, all animals are sacred, but cows are a notch above other animals. This is because cows and humans are intimately connected. Cow manure is plastered on the walls of houses, used as isolation in the roofs and as fuel in the kitchen. Milk and dairy products are very important for Indian cuisine, so the cow is a sacred animal. Even though the consumption of chicken, lamb, and fish is widespread among non-vegetarian Hindus, beef is off the limits.

We also wanted to briefly mention Indian astrology as it’s an important belief among Indians today.

Interestingly, Indian astrology informs about every aspect of life. While considering a potential candidate for marriage, astrological compatibility is taken into account. People look at astrology to decide what to wear the following day, and astrology even determined when Indian independence day should be. Even though India was free from the Brits on August 14, because it was astrologically better to be the following day, Independence Day is celebrated on the 15th.

Hope we are able to shed some light your questions about what Hinduism is and what Hindus believe in. Please feel free to