If you want to get a sense for scuba diving in Kas before reading through our info here, check out the SCUBA DIVING VIDEO above! If you feel icky about swimming with underwater creatures, then you might want to think twice about reading this article. You might be happier catching some rays (though, not stingrays) on the beach instead. 🙂

University diving clubs flock to go diving in Kas, and everyone we talked to was in agreement that if you go scuba diving anywhere in Turkey, then it should be here. However, we weren’t convinced. We put on our diving gear anyway after a bit of friendly persuasion in the hopes that we were wrong, and after spending some time at NaturaBlue we learned just how great diving in Kas really is.

Let me first tell you what the NaturaBlue factor is. We went to Düşler Akademisi (Dreams Academy) the first couple of days we were in Kaş. Düşler Academy is a volunteer-run nonprofit organization founded with the goal of supporting disabled and socially disadvantaged people. Volunteers create opportunities for these people to be able to participate in public life through art and sports.

NaturaBlue is a diving school run by Mr. Yusuf, who has been a long-time supporter of Düşler Academy. NaturaBlue has supported thousands of people with physical or mental disabilities in learning how to scuba dive. We really wanted to meet this Gandalf who turned the impossible into reality, and we wanted to get in on the action. Meeting people like him is as fulfilling as encountering rare marine animals in the deep.

When we first met Mr. Yusuf, we had so many questions that we couldn’t think of what to ask first. We thought that since high season was over that we would have Mr. Yusuf to ourselves 🙂 But NaturaBlue’s ship was full of fans and, needless to say, Mr. Yusuf was quite busy. We were only able to get a couple of questions in like: What can we expect to see tomorrow?

His answer: “We’ll decide where to go based on how crowded it is and the weather. This means that what we will be able to see varies. But I can tell you that because the bottom of the sea is cold, there’s a good chance we’ll see loggerheads as all the turtles are starting to come to the surface.” Yay!

The weather that day was unpredictable. The days had been all sunshine while the nights were freezing – it gave us good insight into what menopause must be like. The temperature difference meant that we were swimming like fish during the day and were reluctant to even sit outside at night.

Spots for Scuba Diving in Kas

We got up early in the morning to snack on something, so we wouldn’t be uncomfortable during the dive. We spoke to our friends a day earlier who had gone on multiple dives in Kas, and learned of the best diving spots. In a state of confusion, we figure that we’d be happy to explore any of Kas 21 diving spots.

One of them says: “Go to Neptune. This is the most interesting place. Don’t expect much in terms of fish, but the underwater rock formations make it feel like you’re in space. But if you want to see sea life, then Oasis is really good.” 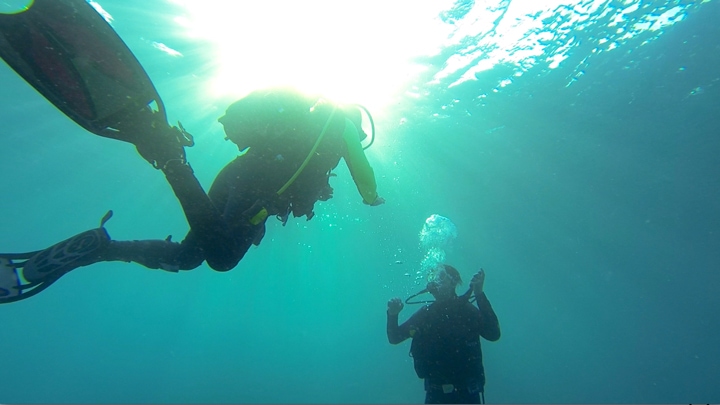 The other says: “Go to Flying Fish. There’s a sunken Italian plane left from WWII. Its propeller is there, undamaged. There’s also of unexploded ammunition scattered around. You absolutely have to see it!”

Then another one says: “Oh, that’s nothing! Here, there’s the Uluburun shipwreck from 1300 BC that you have to see. There are incredible archaeological wrecks from Ottoman and Lycian times!”

Another friend tells us about the amberjacks, tuna, barracudas and large predator fish. We didn’t want to buy into the hype too much, but we couldn’t help it.

All the spots for diving in Kas are really close to each other, and they can all be reached in 15-20 minutes. The further offshore you are, the more obvious it is where the crowds are. As luck would have it, there is no wind, and the visibility is high everywhere. “Then, let’s go to Kanyon (Canyon).” This was great, we thought, as we had seen photos the day before tha thad wowed us.

As the boat approaches the diving spot, they tell us: “The canyon is formed by two 17-meter walls that meet each other in a narrow ‘V’ shape.” The peak is at 5 meters, and the base is at 22 meters. Inside the canyon, there is a narrow cave covered in red shrimp and coral. Though it’s rare, it’s possible to see Mediterranean Monk Seals that come here to hunt. Following the right wall of the canyon, we arrive at the foot of the Dimitri-Pamuk wreck. The boat hit the shore and was sunk during a storm in 1968.

We were putting on our suits when we arrived. Aside from us, there were a couple other boats. We ended up diving with six people, with Mr. Yusuf in the lead. The divers in the group have tons of stars on their strap. They all have a lot of experience and have seen all the wonders of the ocean from Egypt to the Maldives. For them, diving has become a way of life. Without fail, they dive every weekend come rain or shine.

With some trepidation, we ask them what they think of diving in Kas after having experienced everything from frozen lakes to the open sea. Seeing as we’re having fun anyway, what difference does the answer make? 🙂 Still, we are glad to have an encouraging answer: “Don’t come here expecting to see a lot of sea creatures – you have to come here in a different frame of mind. This is an incredible underwater museum. There a number of genuine wrecks here. There’s real history beneath the water’s surface. Kas is considered one of the top 50 dive sites in the world. The reasons for this are that it contains many and varied diving possibilities in a small area, the fact that it’s close to land and the fact that the water is as colorful viewed from above the surface as it is below the surface. There’s a lot to do in Kas. Although the sea is not very fascinating in terms of underwater life, if you get lucky, you really get lucky. You might see a shark or a stingray. But this canyon is really nice, you’ll like it.”

After we jumped off the boat, we paddle in the water to conserve oxygen and to stay afloat. Our instructor reminds us, “The current can be strong in some places of this dive. When I give you the signal, hold onto something and pull yourself forward as you move. Wait for the wave to subside before you move to save you oxygen and strength.”

I was hoping we would get to see a shark. When we let the air out of our jackets and sank beneath the water, we started looking for sharks. If not, catfish. If not catfish, then seals. If nothing else, loggerhead turtles. If only upon arriving at the wreck we could see all three, then we could say that we would never need to go diving again. 🙂 Impossible? Possible.

Every dive is a lottery. Even though the chances are low, sometimes you get rewarded beyond your wildest dreams. Although it’s statistically almost impossible, there is still that tiny possibility of “what if.” Think of how impossible it is to see a white whale in the Black Sea. But a white whale called Aydin was seen roaming the Black Sea. The divers at that time might have hit the jackpot as soon as they went under the surface. Sometimes the odds are in your favor.

Although we entered the canyon expecting not a lot of marine life but stunning scenery, the canyon surprised us with a shoal of silversides. In July-August, silversides come here in droves like people retreating to their summer homes. The hordes of silversides were like a sparkling highway, and we, the divers, were like picnickers on the side. They continued without taking notice of us. Then we saw several types of fish we did not know. Our expectations were so low that it was a really nice surprise.

Words can’t describe the canyon. It’s a really beautiful formation, and we can say it’s as impressive and beautiful as the photos. It’s as meditative as any of the other diving spots in Kas. Passing through it gives you a nice feeling, as if you’re flying through the water.

Wrecks are always interesting diving spots. There’s nothing exciting about a ship that’s been deliberately sunk for the purposes of diving. It doesn’t do anything for the imagination or evoke an emotional response. Here, on the other hand, lie true artifacts. A great titan of a ship went from dominating the waters to being dominated by the sea. It’s not sad, but profound. The ship hit the bottom of the ocean and started a new life. It’s home to the fishes.

We find a place sheltered from the current, and after decompressing there, we resurface in high spirits. Our boat then goes back to Kaş for lunch. After all, we weren’t far away. This is great for those who want a single day of diving and also for those who don’t want to miss out on Kas’ restaurants. But it’s important not to get carried away by the food.

We go back to the boat around 2 pm. After we finish our lunch in Kas, the wind begins to pick up, and it’s a bit stronger than normal. This is a bad sign as it will probably affect visibility. We drop anchor at Fener. For the past couple of days, the divers have seen tons of loggerheads, but we haven’t seen any, even from far away. We decide to leave.

The search for sea turtles

As soon as we dive into the water, we realize that the visibility has decreased a considerable amount. Even the fish have left. The bottom of the sea is empty, almost like a pool. There are no beautiful formations here like we saw in the canyon. It’s as if every living thing had left.

We swim for 20 minutes without seeing much. This time, we decide not to risk it. After returning from our dive, our instructor points to a loggerhead straight ahead. It seems that we found luck at the very last minute. After that long wait, we were ready to give up, but smiled when we saw the turtle eating.

It’s hard to smile, though, with a mask and scuba gear. The only way we were able to show our excitement was by making sounds like a dolphin. Bilge said, “eeee,” and I responded with an “oooo.” He shakes his head to show he understood. We didn’t get the grand prize we were hoping for, but we did get something. 🙂 🙂

Diving in Kas is really the best place to get your scuba on in Turkey. Even though it might not be like the Red Sea, people are happy after diving when they come with the right set of expectations. Diving in Kas has many advantages.

10 Reasons to Come to Kas for Diving

Here’s to your goggles never fogging up, your oxygen never running out and winning the diving lottery. 🙂