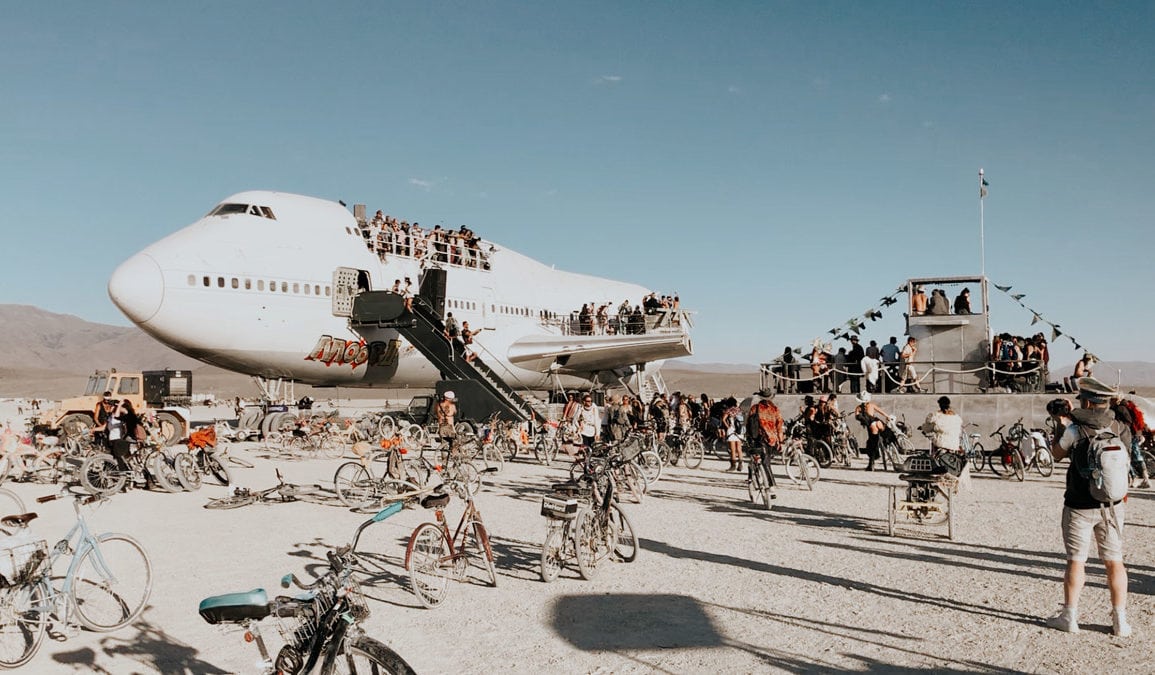 Currently, Burning Man takes place in the Black Rock City in Nevada, but it actually originated in San Francisco. It all started in the summer of 1986 when a small group of friends gathered to burn a 9-foot tall statue on the beach. Each year more and more people showed up for the bonfire. 4 years later it was so crowded that the police had intervened and since than it has been happening in Nevada.

I said this to explain that no matter how wide the attendance to Burning Man from around the world is, it is still a very San Francisco based event. And we all know that San Francisco is something else. Since the summer of love in 1963, it has been sending ripples of art & love-fueled revolution across the world. From the hippies to the anti-Vietnam protests and the African-American revolutionary movement the Black Panthers, San Francisco has been home to many leading counter-culture movements.

The development of Silicon Valley has brought a different kind of revolutionaries into the cultural fabric of San Francisco. Some of the biggest tech game-changers in the world such as Airbnb, Facebook, Pinterest, Google, WhatsApp are here.

With the two revolutionary forces coming together, the city has become the world’s greatest center of innovation and creativity. San Francisco is a futuristic dynamo of revolution with a hippie soul and an engineer’s mind. And that is exactly what you see at Burning Man both in attendance and spirit.

Everybody Is Here, from Hippies to Google, Facebook, SpaceX and Other Tech Giants

I met with many people from NGOs, firefighters, masseurs, teachers, hippies, and artists. Basically people from all walks of life. However, it is an undeniable fact that the cost of attending Burning Man forces a natural selection so they are not the most represented professions in my personal experience.

The real statistics could be very different in reality but most of the random people I met were from the tech circles.  For instance, Elon Musk (SpaceX), Google founders Larry Page and Sergey Brin, Facebook founder Mark Zuckerberg are some of the tech bosses who attend Burning Man. You won’t believe how much the feeling of the playa resembles the cyberspace.

As a matter of fact, while looking for a new CEO, Google founders Larry and Sergey took their candidate Eric Schmidt to Burning Man to test him. There they observed his adaptation skills, how he works with the team, how open he is to change and how he deals with difficult conditions and then hired him. If you are interested, you can read more about it here.

Is It True That Burning Man Is Becoming Increasingly More Elite?

Here are some numbers that demonstrate how participants are becoming more elite:
According to a study, in 2004 61% of the participants had at least a college degree, and this figure grew to 67% by 2013. Meanwhile only 29% of the general U.S. population has a college degree or higher.

CNBC reported that the median annual income of participants was $60,000 in 2017.

Often we hear about celebrities who attended Burning Man. Everybody is welcomed to attend Burning Man, but its association with these celebrities paint an image of Burning Man as an exclusive playground for the jet set. Another result of this association is that sometimes people tend to project their impression of a celebrity on Burning Man. This is enhanced by the media which loves to cherrypick the juicy parts of any event.

While I do think that there is a mismatch between Burning Man’s true spirit and the way it is percieved because of the celebrities, it does not mean they don’t belong here. Many popular figures attend Burning Man. In addition to the famous tech bosses, stars like Susan Sarandon and Will Smith, Paris Hilton, Victoria’s Secret models also come to Burning Man. Under their costumes that they enjoy a relieving anonymity here. I would imagine that blending in with the rest of society is a rare luxury for them. And they love Burning Man for it. Here is the photo Diplo, Paris Hilton and Blondish took together at Burning Man.

As more and more wealthy people are attending Burning Man each year, rich camps known as the Billionaire’s row started to emerge. By many their percieved as a threat to the Burning Man spirit and principles, so there were some backlashes.

Burning Man is the most effortful and inconvenient thing in the world to participate in. You can’t just buy a ticket and go to Burning Man. The preparation process takes months. Throughout the year, camps organize events (BBQs, movie nights, tours, etc.) to raise money for their Burning Man expenses; design their works of art and gifts to offer to the Burning Man community and take care of the entire infrastructure of the camp, from generators to furniture. They do it together with all the camp members. There is a great culture of solidarity and collaborative production around Burning Man.

And the effort doesn’t end there. When you get to Burning Man, you get a completely empty land allocated to your camp where you set up all your facilities together as a team. This takes a few days. Oh, and there is the traffic to enter the area, which can take up to 20+ hours. When you’re in the desert, every day is a struggle with all sorts of deprivation. There is no electricity nor running water to you need to cook, clean yourself, etc. Burning Man takes a lot of effort, but this is exactly where its spirit lies.

Burning Man CEO Goodell said, “Burning Man is anything but convenient, and therein lies its transformative potential!” People are indeed reborn from their ashes in the harsh conditions of the desert.

For years, there has been a big discussion about wealthy people hiring teams to set up camps with the luxury and comfort of their homes. These were referred to as turnkey or plug-and-play camps. When their owners arrive, they are met with their cooled-down rooms, warm meals, and entire camps set and ready to go. The word is that they also hire cleaning personnel and chefs.

Throwing money and buying their way into this process (apparently, it costs them about $10,000) violate many Burning Man principles such as  radical self-reliance, decommodification and communal effort. They are also criticized for putting barriers around their camps to close themselves to visitors. Some think that it damages the feeling of unity and brings in the class differences to place. Normally at Burning Man, you could ask politely to eat, drink, stay and use the facilities in camps that aren’t yours. This is what the Burning Man culture is like. So the turnkey camps are believed to threaten the Burning Man values.

In 2018, Burning Man shut down the billionaire camp called Humano the Tribe for not complying with the environmental rules and issued warnings to 12 other camps. According to Mashable this camp cost up to $100,000 per person. Well, we should also keep in mind that the media tend to exaggerate these kinds of things.

At the same time, another significant Burning Man principle is radical inclusion. Nobody should be presured because they are millionaires or celebrities. It’s neither realistic nor fair to expect someone like Elon Musk to allocate this much time from his life, or someone like Paris Hilton who probably doesn’t even iron her own clothes herself to come here put stakes in the ground to build a camp.

Larry Harvey, Burning Man founder who died of a heart attack last year at the age of 70 had said, “I stay at a turnkey camp, too” to point out that this issue has been overrated (Source: Sacbee). There are so many older people at Burning Man, who shouldn’t be expected to show such an effort, either.

In short, they are trying to find a way to consolidate these two contradicting principles.