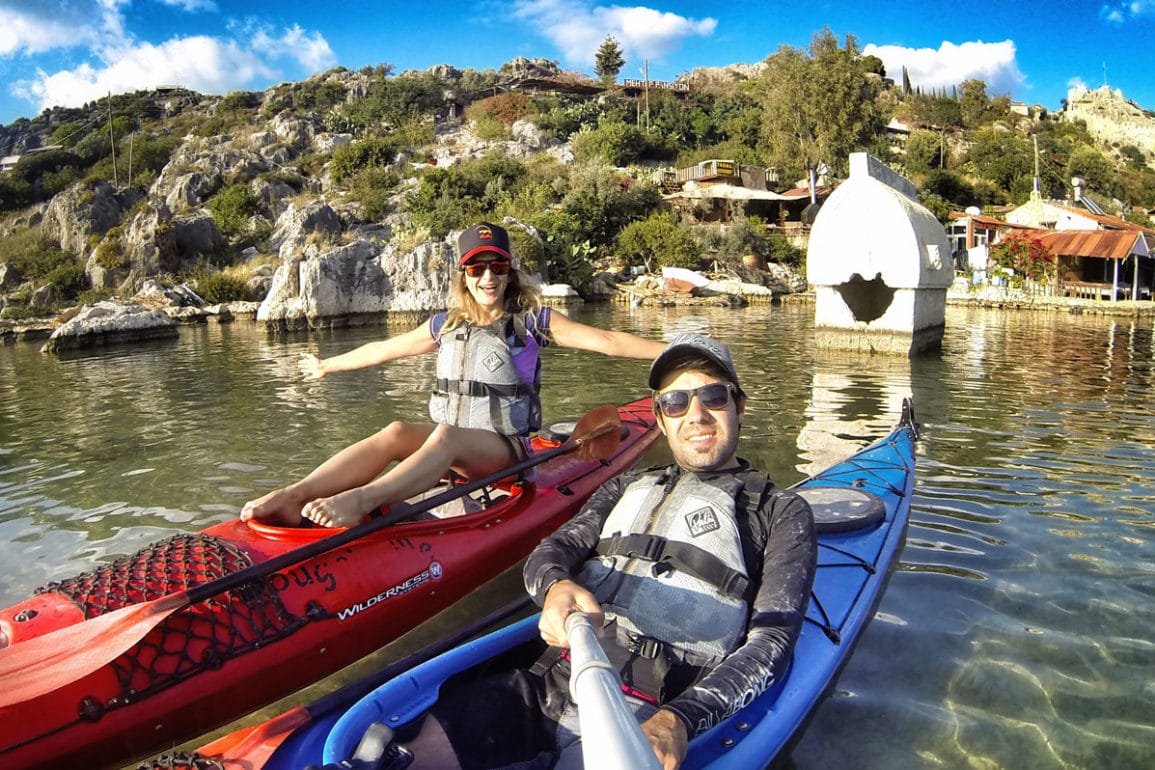 PLACES TO SEE IN AND AROUND KAS, TURKEY

Kas (Kaş in Turkish) is a town in the southern province of Antalya and it is our favorite city on Turkey’s Mediterranean coast. You can spend weeks here without getting bored. There is a lot to see & do in Kas and around.

As soon as you arrive in Kas, you’ll notice the King of Lykas tomb in the center. This is just a small part of what Kas has to offer regarding historical importance. Since it was sunny throughout most of the year, Kas was known as “Sun Country,” and it was the capital of the Lycian Union. Many historical buildings in Kas, as well as some ancient cities, have been put on UNESCO’s World Heritage List.

Kas has been known by different names throughout history: Antiphellus, Patara, Xanthos, Antiphellus, Isinda, Pirha, Nisa, Apollonia and Kekova are just a few of them.

Kaş means eyebrow in Turkish, and it is said that it was named thus because Meis Island looks like an eye and Kas Bay resembles the eyebrow over it.

Map of Places to See Around Kas

You can view the map by zooming in. 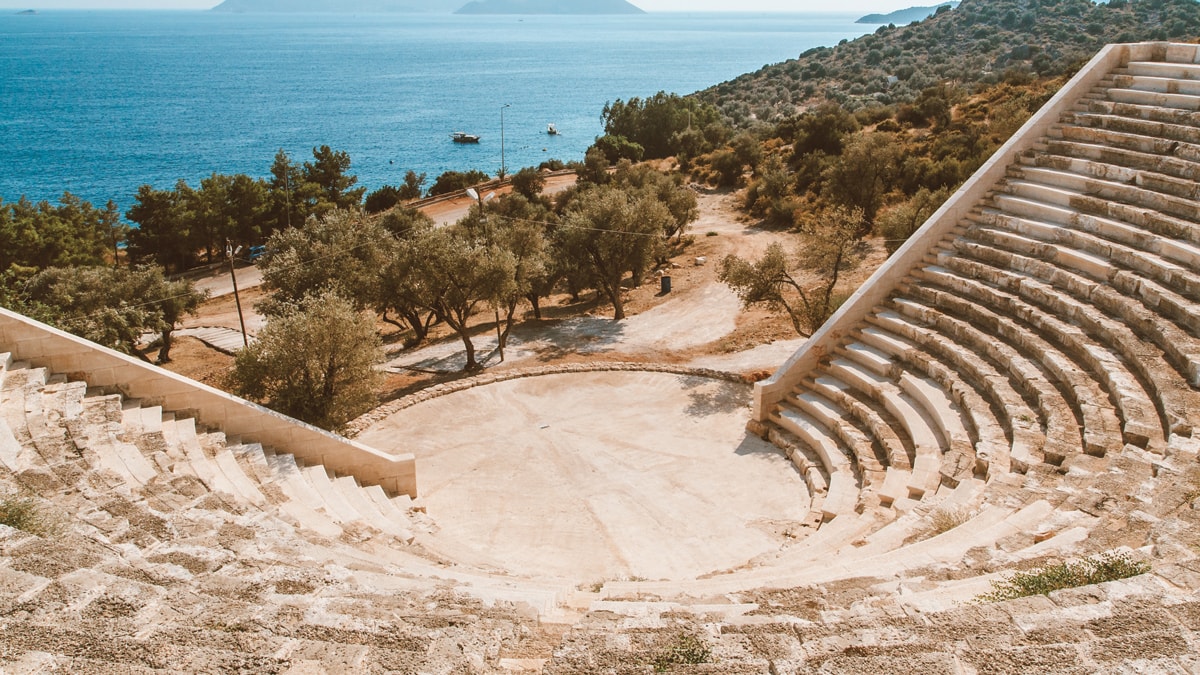 The Lycians knew how to build a city. They had this beautiful view every day of their lives. But we’re sad to say that not much of Antiphellos has survived today, except for the theater. Upon entering the theater, you’ll feel isolated from everything else. The seating area is the perfect spot for watching the sun go down. For photography enthusiasts: We think that this is the most photogenic place in Kas, Turkey. Click here for the location. Number 1 on the map. 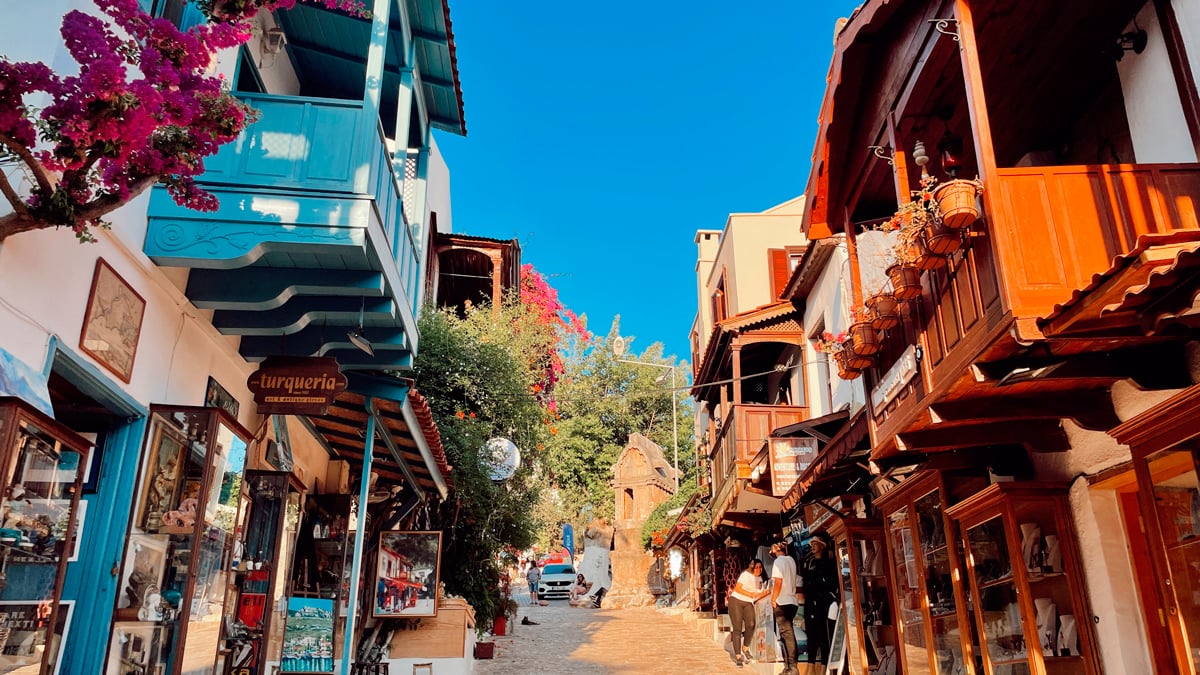 You should definitely amble down the streets surrounding the bazaar area, which are filled with old wooden houses, cafes, boutiques and designer shops selling handmade products. The bazaar is very lovely and different from other bazaars you’ll see in Turkey. Click here for the location. Number 2 on the map.

In the Long Bazaar, you’ll see shops selling handcrafted jewelry and various kinds of souvenirs, as well as the King’s Tomb. The bazaar is by far more interesting than the tomb, but since you’ll be in the neighborhood, take a peep at the single block dating back to the 4th century BC. There is an 8-line inscription under the block alongside a motif depicting a man, two women and two lions.

Located about 40 kilometers from Kas, Antalya, you’ll find the famous ancient city of Patara. Once the  capital of the Lycian Union, it had a parliament building where members of the union would meet. The city had three voting rights in the union and maintained its importance throughout the ages.

Located about 50 kilometers from Kas, Xanthos is on the UNESCO World Heritage List and has repeatedly been burned down and rebuilt throughout history. Excavations continue to this day. The artifacts that are displayed here are not even one-fourth of the city.

The story of Xanthos is inscribed on one of the artifacts here: When the locals realized that they were not going to win the battle against the invading Persians, they went to the gate of the palace and set themselves on fire.

The Sleeping Giant is one of Kas’ greatest legends. It’s a distinctive rock formation on top of a mountain that was given its name because it looks … well … like a sleeping giant. According to the legend, one of the Olympus gods was angry with Prometheus, a fisherman, and separated him from his love. The fisherman went to save his love, infuriating the god, who turned them both into mountains – one on Kas and one on Meis Island.

It’s said that the lovers have been looking forward to the day they will be able to see each other again. Ok, so you might not care for legends, but this is a great place to hang out and enjoy the spectacular scenery.

Make sure to check out these places nearby Kas, Turkey:

Demre, which is known for the ancient city of Myra, St.Nicholas (Santa Claus) Church and its blue crabs, is located 40 minutes away from Kas. St. Nicholas Church, which is an important place for Christian pilgrims, has Santa Claus-related activities every year on December 6th. Click here for the location. Number 5 on the map. 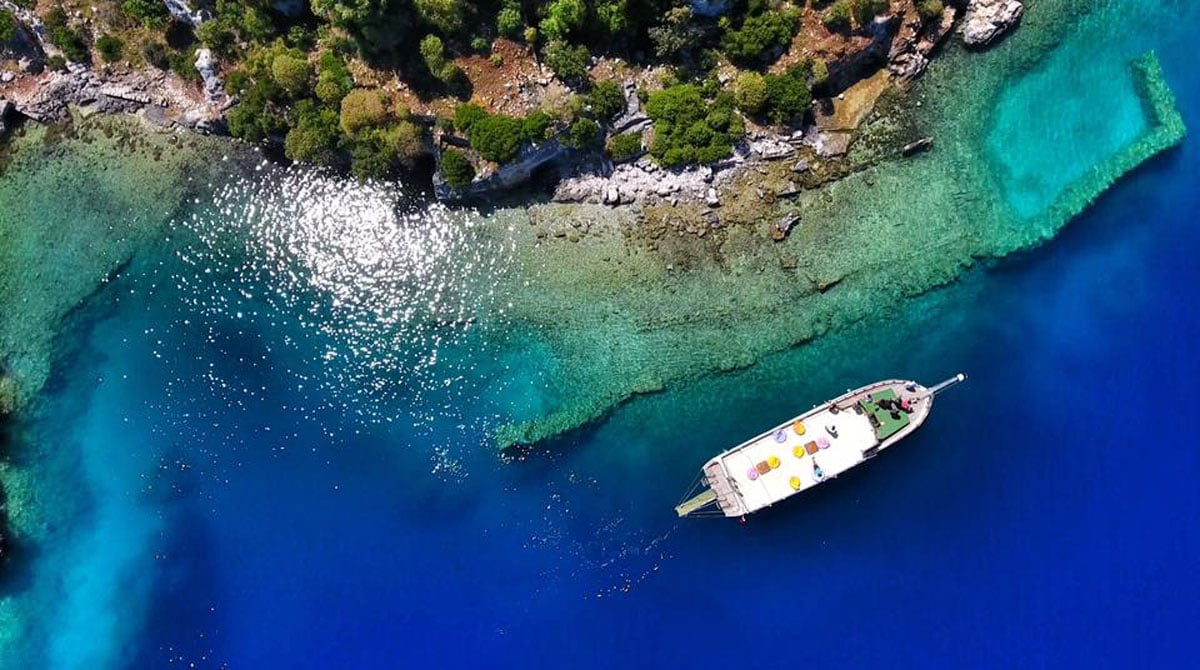 The Sunken City is located in the center of Kalekoy, in an area of the ancient city of Dolkisthe, which was destroyed by earthquakes in the 2nd century. There is also a famous shipyard on the edge of Kekova Island. Rising out from the water, you can see the top of a church belonging to the Byzantine Empire as well as shops and houses. It’s quite a sight! Click here for the location. Number 6 on the map. 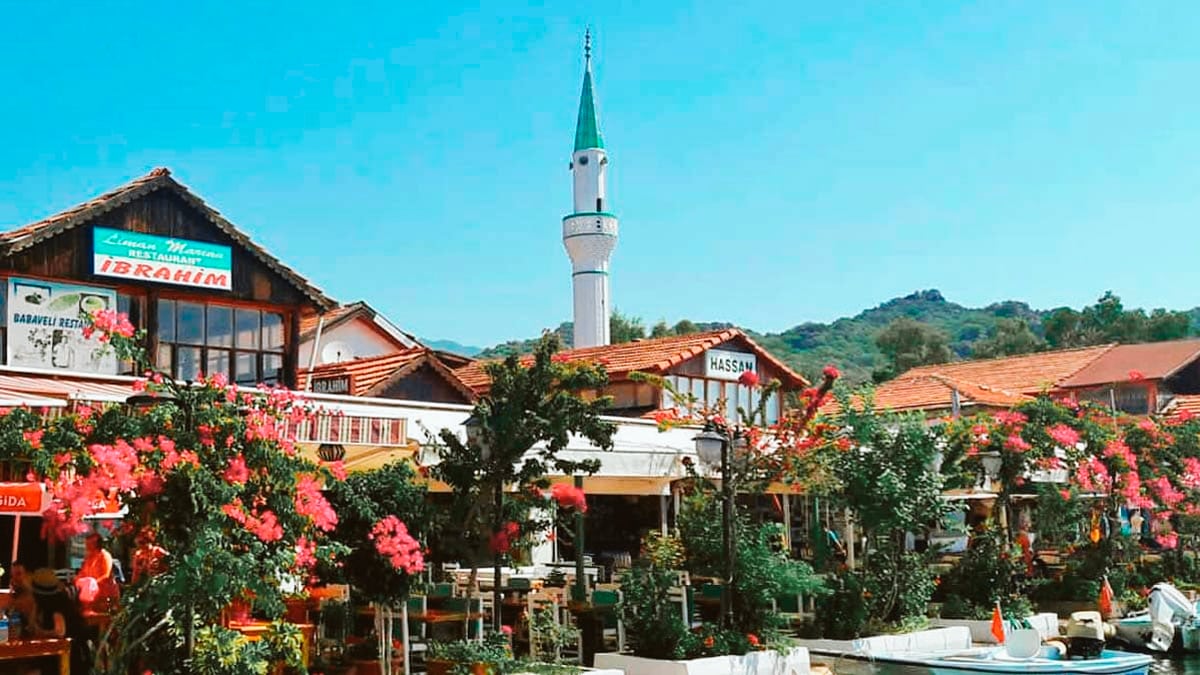 This is a charming little town where you can find modest fish and raki (a strong Turkish spirit made of anise) and fresh burned ice cream (yes, you read that right), as well as small pensions. On top of this, you’ll be able to find boat tours leaving from the harbor here to go to Kekova or Kalekoy, or between Antalya and Kas for daytrippers.  Click here for the location. Number 7 on the map.

The best thing to do here is to canoe from Kalekoy and discover the treasures that await you at the sunken city located right across from the canyon. One note: A lot of this area, which is known by its ancient name of Simena from the Lycian period, is closed off to diving.

You’ll be able to see the tombs left over from the Lycian era that are clustered around the village’s marina and can swim here. After a day of exploration and swimming, and dine at one of Kalekoy’s lovely restaurants. There is also a castle at the top of the hill that has a fantastic view of the sea and has a small amphitheater where you can watch the sunset. Click here for the location. Number 8 on the map.

The canyon is said to have formed after an earthquake and is about 14 kilometers long. It has a unique beauty and acts as a border between the provinces of Mugla and Antalya. This canyon was “found” by a shepherd years ago. Since then, there have been a lot of businesses that have set up shop here.

You’ll notice that the canyon is full of adventures. BUT make sure that you bring walking shoes with you, not just flip-flops. (You can also rent shoes on site.) Seeing the beautiful waterfalls and the geographical formations of this place are the best things to do around Kas, Turkey. Even in Kas’ deadly summer heat!

If you want, you can join a tour to explore the canyon, and it’ll take about 1-2 hours of your time. If you wish to spend more time at the canyon, then you can come here by car. There are tons of car parks nearby, so parking shouldn’t be a problem. Click here for the location. Number 9 on the map.

Kalkan is a town about 25 kilometers from Kas, Antalya that was founded by Greek mariners 200 years ago. It also bears the traces of Lycian civilization. Kaputas Beach and Patara Beach are two of the world-famous beaches located within the borders of Kalkan. Another thing to keep in mind is that 80% of Kalkan’s population is British, meaning that a lot of the places to go in Kalkan have been shaped around the expat population there.

We should also note that Kalkan is quieter than Kas. If you’ve been to Kas, then you’ve noticed the boutique pensions; however, that’s something that doesn’t exist in Kalkan. Instead, smaller luxury hotels and villas are more common. Click here for the location. Number 10 on the map.

Some Kas beaches are crowned, some lonely, some sandy, some peddled, some cold, some warm… Check out Best Kas Beaches to find the right beach for you.